The U.S. is warning its citizens against traveling in areas in Ethiopia where there have been anti-government protests.

In a statement issued Friday, the State Department advised citizens to avoid areas where violent clashes between protesters and government security forces have taken place, mostly in the regional states of Amhara and Oromia.

It stressed that citizens “avoid demonstrations and large gatherings.”

Telephone and internet services have been limited due to recent protests, which has prevented the U.S. Embassy from communicating with citizens in the country, the statement added.

Since early August, the government has stopped local and foreign media outlets from covering the anti-government protests. On August 8 and 9, three accredited foreign journalists were arrested for 24 hours in the Arsi Negele area of the Oromia region, according to the Foreign Correspondents’ Association of Ethiopia, part of a nonprofit organization representing about 500 journalists in East Africa. 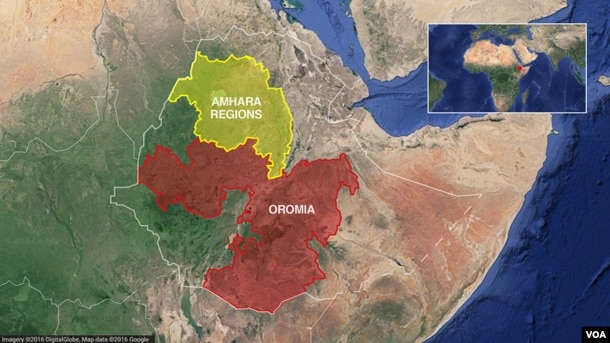 Fred de Sam Lazaro, a journalist with Public Broadcasting Service (PBS), was one of the reporters arrested during his trip to the Oromia region to cover the drought and climate change.

Speaking about why the journalists were arrested, de Sam Lazaro said, “There was no reason provided and we spent a couple of hours sitting in the police station in Shashemene and they essentially asked for our passport.” Shashemene is located in west Arsi zone.

He told VOA he was “horribly disappointed because we loved being in that country. I love Ethiopia because the stories are very rich, the narratives are very rich, and the culture is so rich and diverse.”

De Sam Lazaro returned to the United States a week ago.

“There’s extreme paranoia about control and political upheaval and that almost invites more scrutiny,” he said. Crackdown on civil society will only exacerbate the situation and raise more questions, he added.

“How have they been able to deal with the extraordinary ethnic tension that pervades the whole region? People are not happy, the Amhara are not happy. The Oromo people are not happy,” de Sam Lazaro said. “And where is the grand coalition that’s supposed to build this country, this leader in Africa, which Ethiopia is by virtue of its sheer size? It’s essentially shooting themselves in the foot in many ways.”

The Ethiopian government blames the opposition in and outside the country for organizing what it calls “unauthorized protests by anti-peace forces.”

According to a statement by the government communications office, some protesters were carrying lethal weapons, including explosives. Opposition leaders deny the allegations, stating that the protesters were peaceful and unarmed.

The dispute in central Ethiopia dates back to November 2015. Demonstrators opposed a government plan to expand the municipal boundaries of the capital, Addis Ababa, into the Oromia Region. Farmers in the region were particularly upset, worrying that it could mean an end to their livelihood.

The government put the capital expansion on hold, and protests quieted down — but the grievance did not go away.

In early July, another wave of protests began, this time farther north in the city of Gonder, in the Amhara Region, where the main complaint is that three districts under the Tigray Regional State want to be reintegrated into the Amhara Regional state, observers say.

Ethiopians, Egyptians beheaded by IS named ‘Martyrs of the 21th Century’