By Anthony Joseph for MailOnline

A university lecturer who was granted asylum in the UK allegedly flew out to an Ethiopian terrorist training camp and was caught with a ‘Terrorism for Dummies’ manual.

Tadesse Kersmo, 51, was arrested by counter terrorism officers at London Heathrow Airport in September last year on an inbound flight from Eritrea, via Cairo.

Within a file marked ‘military’ on his hard drive he had a manual on US Navy Seal sniper training, jurors were told.

Downloaded on May 11th, 2016, it contained information on hitting moving targets, shooting at night, weapons and training schedules.

Asked why he would download such a manual, Kersmo told police: ‘Well simply interested and I found them because they’re there, I don’t know actually, actually I cannot explain.

‘I simply get documents, I downloaded them.’

He denied downloading it to train himself or others to be snipers, and said he had no skills with weapons.

He is alleged to have been a prominent critic of his country’s government before he fled to the United Kingdom and was granted asylum in 2009.

He was charged with seven counts of possessing articles containing information likely to be useful to terrorists and one count of attending a training camp.

The charges he faces relate to activity for an overseas Ethiopian political movement.

One file, a book called Put ‘Em Down Take ‘Em Out, written by a former inmate of maximum security Folsom Prison in California, was downloaded on May 12 last year.

The manual contained guidance on knife attacks, including carrying out a practice drill on a dummy with a real knife.

It then asked 17 questions about the drill, ending with, ‘did you kill the opponent?’

Prosecutor Barnaby Jameson said: ‘It’s another publication focused on killing people. And a guide that gives advice on attacking a dummy with a real knife is not simply a self-defence manual.

‘And given the last words ‘did you kill the opponent’ we can deduce that ‘take em out’ means exactly what it says.’

Kersmo also had on his hard drive ‘The Compilation of Security and Intelligence Principles’ believed to be by Jihadist group ‘Hizb Tawheed wal Qitaal’. 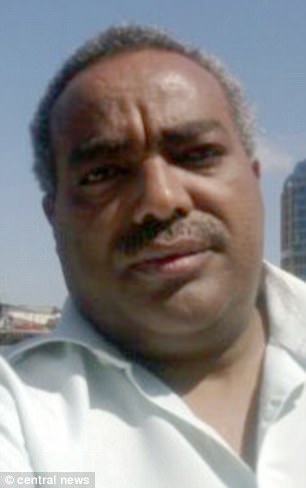 Jurors heard it contained information on espionage, surveillance, military training, weapons and operations, and had an image of the 9/11 attack on the Twin Towers on the front.

Kersmo told police he was surprised it was there as generally he did not like Islamic extremists, but he wanted to learn intelligence, the court was told.

Mr Jameson said: ‘To his students there was nothing to suggest the defendant was anything more than a peaceable academic with a passionate interest in the politics of Ethiopia.

‘There was – as you will discover, more than one side to this lecturer in business and economics.’

Describing Kersmo to the jury, Mr Jameson said he was born on May 5, 1966, and lived in Ethiopia until 2009 when, ‘as a prominent critic of the Ethiopian government, he fled to the United Kingdom’.

The prosecutor continued: ‘Since then he has lived in this country, obtaining leave to remain as the husband of an asylum seeker.

‘Among other positions, he worked a job as a lecturer at Greenwich University.

‘As you will hear, he taught courses there on business research methods, economics, international business and professional development.’

Kersmo was allegedly discovered in possession of four military themed documents, including a US Military sniper manual and a mini-manual on how to conduct urban guerrilla warfare.

He was caught with the material on two occasions, once on September 27, 2016, and again at Heathrow on January 4. 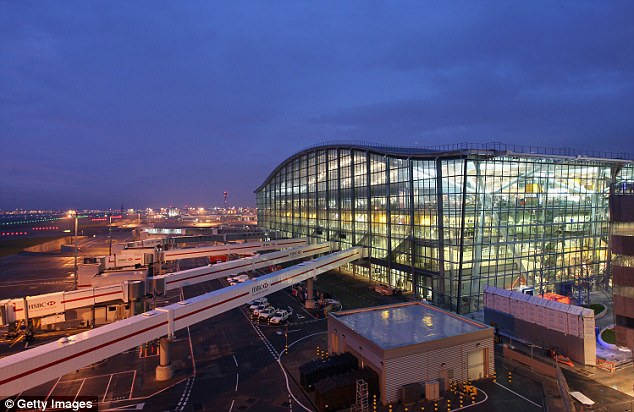 Kersmo was caught with the material on two occasions, once on September 27, 2016, and again at Heathrow (file photo) on January 4

One charge states Kersmo attended a location used for terrorist training and was photographed shaking hands with suspected terrorists.

He worked as a senior lecturer at Greenwich School of Management until 2017 and also taught at Greenwich University.

Kersmo appeared in the dock wearing a light blue suit, a white shirt and a blue spotted tie for the first day of his trial, provisionally scheduled to last until 21 December.

Mr Jameson told the jury of six men and six women that Kersmo ‘did a fair amount of travelling’ and was tracked making flights from Heathrow to Eritrea.

The prosecutor said Kersmo made journeys to Eritrea between 5 December 2015 and 27 September 2016.

Mr Jameson said that Ethiopia and Eritrea were once a unified block and ‘following a war of independence Eritrea became autonomous in 1993’.

‘Tensions between the two countries remain high, the border has witnessed continuing flare-ups of violence that continue to this day,’ he added.

‘You will have to consider why the defendant was choosing to visit a country that was a neighbour to Ethiopia but not a friend.

‘In due course you will see some photographs that make his agenda abundantly clear.’

The prosecutor said that Kersmo was stopped on September 27, 2016, by counter-terrorist officers using their powers under Schedule 7 of the Terrorist Act 2000.

Mr Jameson said that one of the devices Kersmo was carrying was an external hard drive and documents ‘of a nature outside economics and business studies’ were discovered.