The cosmic performance of the century didn’t disappoint.

Whether they were camped out in small towns or packed into large stadiums, Americans from coast to coast donned protective glasses and gazed in awe at the first total solar eclipse to cross the nation since 1918.

The historic eclipse carved a narrow “path of totality” all the way from Salem, Oregon, to Charleston, South Carolina. Iffy weather temporarily blocked the view in some places, raising anxiety among eclipse watchers, but the clouds ultimately cleared long enough for them to get a glimpse.

“It’s incredible, actually, to be here amongst all these people, and for everybody to come together to see this,” one eclipse reveler, who didn’t identify himself, told NBC News from Carbondale, Illinois. “You’ve got all different types of faces and people out there, but they came together for this moment. It’s incredible.”

Here’s what to know about the eclipse:

Related: Everything You Need to Know About the Eclipse

The eclipse traveled west to east, in a 70-mile-wide band of prime viewing. First up was Oregon, and for the tiny town of Madras, where views were best, the population of 6,200 swelled to more than 100,000 as tourists flocked to see it.

The show managed to live up to the hype.

At 10:19 a.m. PT, darkness enveloped Madras as the moon eclipsed the sun. Crowds cheered and pointed, marveling at the eclipse’s beauty even as they shivered in temperatures that dropped significantly.

Next up for totality was Casper, Wyoming, which erupted in similar roars just before noon local time.

It then made its way through Lincoln, Nebraska, before passing through Missouri.

Carbondale, Illinois, and Hopkinsville, Kentucky, were in the dark for the longest, at 2 minutes, 38 seconds.

In Carbondale, about 15,000 people gathered in a stadium to watch the phenomenon. A megaphone blasted safety instructions to the audience before they fell silent ahead of the total eclipse.

Some cloud cover in Carbondale partially obstructed the view for several seconds, prompting some boos from disappointed eclipse viewers. But it didn’t temper the excitement for long: The clouds parted, and the crowd gasped and cheered as 90 degree-temperatures suddenly plummeted and the mid-afternoon light turned to darkness.

In Charleston, clouds from a lightning storm cleared just in time to give the South Carolina city a great view.

Not everyone was dazzled by the eclipse. American employers were anticipated to lose nearly $700 million in lost productivity, according to firm Challenger, Gray & Christmas.

And those eager to safely catch a glimpse of the moon-covered sun were met with problems, too. Eclipse eyewear sold out in many places, and counterfeits popped up in others.

Meanwhile, AAA urged drivers to pull over if they wanted to look up, and advised against wearing eclipse glasses behind the wheel.

Related: Spectacular Photos of the Eclipse Captured Across the Country

Numerous school districts across the country closed for the day. NASA positioned cameras to capture the event from the International Space Station. Singer Bonnie Tyler promised to perform her 1980s hit “Total Eclipse of the Heart” on a Royal Caribbean cruise ship Monday afternoon.

Even the White House was feeling the excitement. President Donald Trump and the first lady went to the Truman Balcony to watch, armed with the same eclipse-safe glasses that so many other Americans were wearing on Monday.

Former President George Bush tweeted an image of his family watching, too. 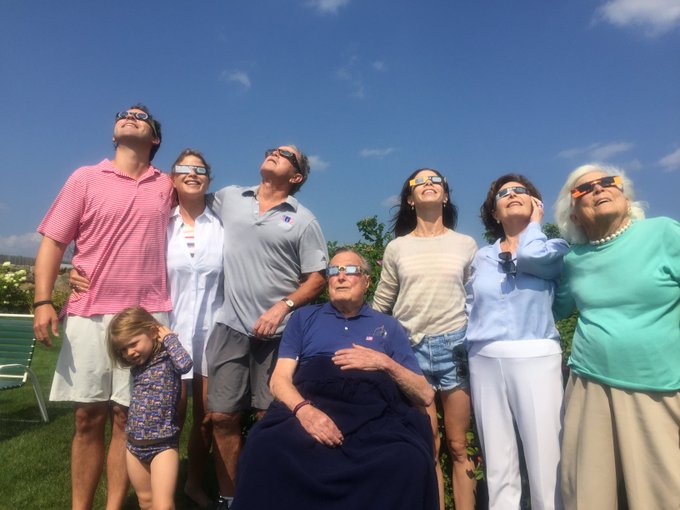 Four generations of family taking in the partial eclipse today. Already looking forward to the next one in Texas in 2024!

If you missed the big event, don’t worry: the next total solar eclipse in America will be in 2024. The next coast-to-coast one, however, won’t be until 2045.

Oxfam: 700,000 at Risk of Starvation in Ethiopia – Salem Solomon