When the Taste of Ethiopia food truck first fired up its griddle last summer, Pat Joyce and his son, Tesfaye, saw the same scenario play out time and again.

A potential customer walks up, looks at the menu for a minute or two and then politely keeps on walking.

“That’s the most common one,” Tesfaye said. “You can kind of tell they don’t want to offend you, so they don’t tell you everything they’re thinking.”

At one point, Pat thought they might have to repaint the brightly colored trailer that features Ethiopian folk art by artist Spencer Young of Black Creek.

“They see Ethiopia and they see that folk art and, boom, they were either at the egg roll guy or the barbecue guy (food trucks),” Pat said. “But they’re getting it now.”

With nearly 900 followers on Facebook and a weekly presence at the farmers markets in the Broadway District, De Pere and Howard, Taste of Ethiopia is winning over curious diners — one taco at a time.

That’s the recommended $3 starter kit for people who want an introduction to the exotic Ethiopian spices that give distinctive flavor to the dishes — from loaded cheese fries with slow-cooked and seasoned steak, pork or chicken to deep-fried dessert pastries called sambusas to even an Ethiopian spin on the American grilled cheese.

“I joke around that we kind of slip these spices past them,” Pat said. “Once they try it, they’re just hooked.”

Getting local taste buds acclimated to Ethiopian-American fusion food is only part of the Joyces’ mission. The bigger one is back in Ethiopia, where Pat adopted Tesfaye and two of his siblings from an orphanage 10 years ago.

It was a life-changing trip for Pat, who worked for 30 years as a truck driver at KI and graduated from the University of Wisconsin-Green Bay last year with a degree in social work. 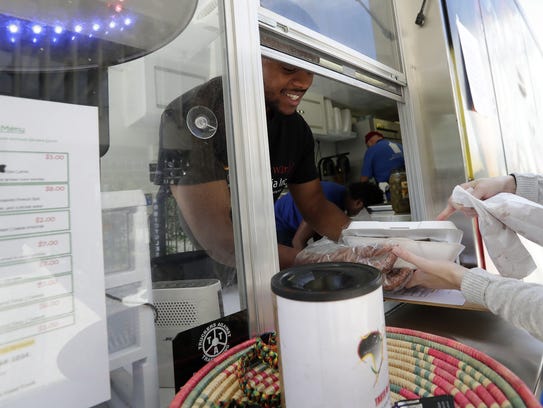 Buy PhotoTesfaye Joyce, 25, serves a box of tacos at Taste of Ethiopia. He runs the food truck with his dad, Pat Joyce of De Pere, who adopted Tesfaye and two of his siblings from an Ethiopian orphanage 10 years ago. (Photo: Adam Wesley/USA TODAY NETWORK-Wisconsin)

He created Pay It Forward/Ethiopia Inc. as a nonprofit organization to help fund ministry work in the African country, where thousands of homeless children live in tunnels and sewers beneath the streets and in landfills in the capital city of Addis Ababa. All profits from the Taste of Ethiopia food truck go toward the ministry, with the ultimate goal of purchasing a second truck to send to Addis Ababa.

That truck would help to feed the street orphans and work with local service agencies, churches and other ministries to get them in safer situations and ultimately teach children how to grow their own grains or raise their own fish.

“You have a city that looks about the size of Milwaukee with the population of Hong Kong and just no resources,” Pat said. “So we want to get one of these to move from schoolyard to schoolyard and try to entice those little ones out there that are begging or stealing or foraging for food, and then work with the locals. There are some really good local ministries on the ground there.”

That Pat finds himself as chef of a food truck, inviting you to “take a deep whiff” of the seasoned clarified butter he makes himself, is something the De Pere father of six never imagined for himself. The learning curve has been substantial.

“I”m a truck driver. I’m not a bookkeeper. I’m not a business man. I’m not a restaurant owner. So we’re kind of stumbling around … but it’s working,” he said. “We finally are building it up.”

When Pat adopted Tesfaye, now 25, and his siblings, the family would make almost weekly trips to Milwaukee to eat at the city’s two Ethiopian restaurants. It was the closest place to get a fix for a taste of back home. One day, in passing, Tesfaye told his dad they should open an Ethiopian restaurant in Green Bay someday.

“I don’t where that came from, but it turned into this,” said Pat, laughing as he stood in the mobile kitchen preparing for the lunch-hour crowd on a recent Friday in downtown Green Bay.

“This” is a licensed, fully functional kitchen on wheels with the same permit as if Pat had opened a brick-and-mortar restaurant. It’s equipped with two 40-pound fryers, a 4-foot griddle, a double-deep oven, gas burners, a refrigerator, freezer, three dish-washing sinks, a hand-washing sink and a fire suppression system that’s required for anything that involves oil or butter. 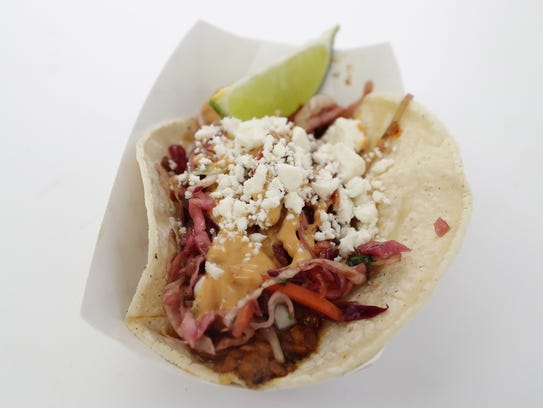 Buy PhotoA red lentil taco is among the menu offerings at Taste of Ethiopia. Tacos are also served with chicken, steak or pork, all slow-cooked in Ethiopian spices. (Photo: Adam Wesley/USA TODAY NETWORK-Wisconsin)

It’s the spices that hook people

The truck is on the move five or six days every week, from its regular farmers market stints to church events to a couple of food truck weddings at Badger State Brewing Co. Mondays are usually reserved for restocking and food preparation for the week. It’s a busy day for Pat, who taught himself how to cook Ethiopian dishes by watching YouTube videos.

Early on, he was importing things like berbere awaze, a spicy simmer sauce, and niter kibbeh, the spiced clarified butter. Both were expensive. He now makes them himself, purchasing spices from a distributor in Kentucky who imports directly from Ethiopia.

On a day off, you’re likely to find Pat cooking down 10 pounds of carefully seasoned unsalted butter for eight hours and straining it through a cheesecloth. Or making wot, a stew of peppers, onions, garlic and other spices used as a marinade for the pork, chicken and steak that is slow-cooked for entrees like street tacos, deep-fried wraps and the Not-So-Ethiopian Shredded Pork Sammy.

Trial and error has helped him refine his recipes and focus the menu offerings, but there’s one thing he still hasn’t mastered: how to describe Ethiopian food to someone who has never tasted it.

“Indian food is the closest, but really it doesn’t taste anything like it. It’s spicy, but it’s not burn your mouth hot,” he said, noting that it pairs well with a cold craft beer. (He’s been known to swap tacos for a growler with the craft breweries he frequently partners with.)

There’s not a review on the Taste of Ethiopia Facebook page that doesn’t rave. Ninety percent of them from total strangers, Pat says.

“We’ve heard things like, ‘This sandwich has changed my life.’ Ridiculous reviews,” he said. “But even friends that are real conservative and don’t like spicy food or this or that, I coax them into trying it and it’s like, ‘Oh my God, oh my God.’ … I’m not boasting; it’s really the spices that do it.

“I think we’re getting closer to doing real authentic high-dollar plates. The foodies are starting to find us and they want the real deal,” said Pat, who hasn’t yet learned how to make injera, the spongy sourdough flatbread served in Ethiopia.

Menus change by month and by event. Sometimes more labor-intensive dishes are taken off to allow Pat, Tesfaye and Mulugeta Breecher, a 21-year-old Ethiopian-American who is also key to manning the truck, to serve more people faster. Whatever goes out the window has way of grabbing people’s attention.

“If the nachos go out the door and people start eating them, then we have a run of nachos. If our grilled cheese goes out, people look for that,” Pat said.

Buy PhotoPat Joyce stirs seasonings into his pulled pork while setting up Taste of Ethiopia outside the Brown County Central Library last month. He and his son, Tesfaye, started the nonprofit food truck after going to Milwaukee on a weekly basis to find authentic Ethiopian food. (Photo: Adam Wesley/USA TODAY NETWORK-Wisconsin)

A big heart for little kids

When Tesfaye suggested opening an Ethiopian restaurant, he never had a food truck in mind, much less a nonprofit food truck. His dream was to make it as a soccer star and open his own orphanage. When he realized at the college level that soccer wasn’t his calling, his backup plan was to get an education, a good job and start that orphanage. He graduated with a degree in business last year from Wisconsin Lutheran College.

“And then this came along, and I figure this is the best way to do it, out here with the people, spending time outside, not trapped in the office and …. doing something good for people you want to help,” he said.

Tesfaye has been back to Ethiopia just once (two and a half years ago) since coming to Green Bay. He, Pat and Breecher hope to go back for a month or two this winter to get the second food truck set up. Pat is just starting the extensive paperwork to gain non-governmental organization status to make that a reality. It’s a process that will go to the Office of the Secretary of State of Wisconsin to Washington, D.C. to the Ministry of Foreign Affairs of Ethiopia.

It feels daunting at times.

“You have to remind yourself you’re doing it for a reason,” Pat said. “Anybody who has been to Ethiopia, pretty much all the parents I know who have been there, it’s just life-changing.”

“When you see something on TV and when you see it in person, that’s totally different,” Tesfaye said. “When he (Pat) came to get us, he saw everything he saw on TV in person and that changed him a lot. … He’s got a huge heart for little kids, like we all do. That’s the main driver, is the heart for the little ones.”

Where to get a Taste of Ethiopia

» 4-7 p.m. Tuesdays at Village of Howard Farmers Market, Cardinal Lane behind the Howard YMCA (no market on Fourth of July)

OPDO failed once again to answer the legitimate demands of the Oromo people!

Habtamu Gebreselassie, 24, is accused of assaults at Massage

Ethiopia Faces Imminent Danger & The rest of us who love the country have failed    [Aklog Birara (Dr.)]