Somalia’s parliament, the House of the People, has instituted a body to investigate the government’s decision to handover a Somali national to neighbouring Ethiopia.

Their position was contained in a press release issued on Monday September 18, 2017 from the office of the Speaker of the House. It comprises 15 persons whose mandate is to report back on the circumstances surrounding the handover.

Mogadishu’s detention and subsequent transfer of Mr. Abdikarin Sheikh Muse of the Ogaden National Liberation Front (ONLF) to Ethiopia in August 2017 sparked outrage in the country. The action has been described as a breach of Somali and international laws – which decries refoulement.

The Somali government has forcefully transferred a political refugee to Ethiopia which is known to torture and humiliate its opponents.

The parliament was on recess at the time the action took place, most lawmakers had gone on the annual pilgrimage to Saudi Arabia. The Upper House met but deferred to the Lower Chamber to deal with the matter first. The current decision is one issued by the two houses, reports indicate. 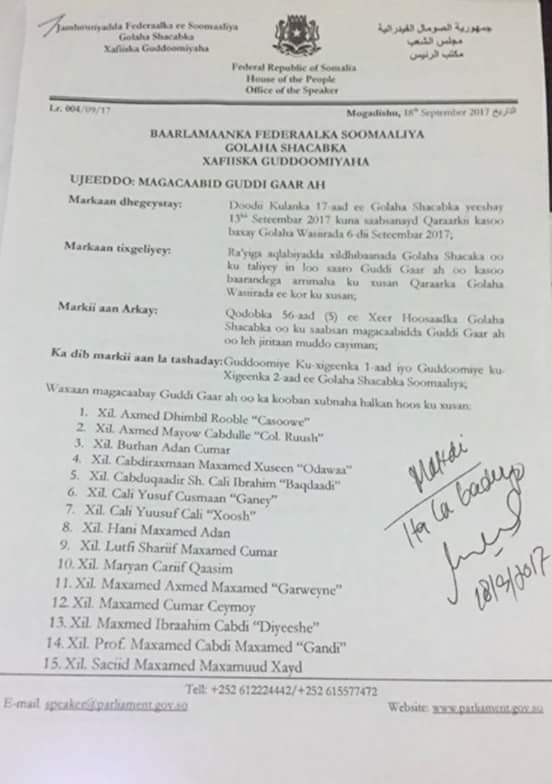 Somali parliament appoints commitee to probe the case of Qalbi-Dhagax following Somalia’s move to hand over the ONLF commander to Ethiopia.

The ONLF group in a statement confirming the handover of its top official expressed worry about the possible mistreatment that Sheikh Muse was likely to face.

“The Somali government has forcefully transferred a political refugee to Ethiopia which is known to torture and humiliate its opponents. It has been intimated that Mr. Abdikarin was sacrificed in order ti get political support from the Ethiopian regime,” the statement read.

It condemned the Somali regime and called for the release of Muse – who Ethiopia insists holds an Ethiopian passport and opted to return voluntarily. That claim has been roundly rejected by the family and the group which he belonged to.

ONLF describes itself as “a national liberation organisation that struggles for the rights of the Somali people in Ogaden and has no involvement whatsoever in Somalia’s multifaceted conflict at all.”

The Ogaden region a disputed territory between both countries was the subject of a war in February 1977. Ex-Cuban president Fidel Castro okayed the deployment of 1000s of soldiers under the leadership of one General Arnaldo Ochoa to help Ethiopia in a war.

The troops went to support the regime under Mengistu Haile Mariam to annex the Ogaden region. Somalia at the time, albeit allies of Ethioipia believed they were winning the war but forcefully surrendered the Ogaden plateau to the 17,000 Cuban soldiers.