The toxin contained in jequirity beans, also called rosary peas, is similar to deadly ricin, derived from the beans of the castor oil plant. Both plants are native to Hong Kong

Customs officials in southern China have stopped a traveller returning from Ethiopia with a bag containing hundreds of highly toxic jequirity beans, according to mainland media.

The man was carrying 100g of the seeds when he was stopped by inspectors at Guangzhou Baiyun International Airport in Guangdong province, the Southern Daily reported.

The hard red and black seeds are attractive but highly poisonous and found mainly found in India. They are native to Southeast Asia, including Hong Kong.

The seeds are popular in ornaments and jewellery or even rosary beads, hence one of their other common names, rosary peas. 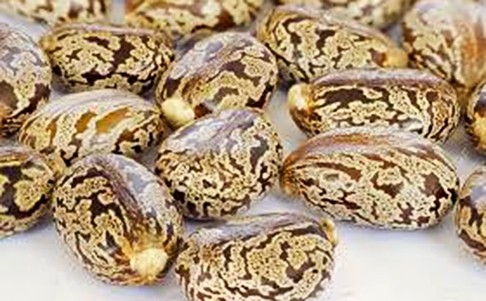 Castor oil seeds, popular as beads for jewellery or in musical instruments like maracas, are the source of the deadly toxin ricin. Photo: SCMP Pictures.

The passenger arriving in Guangzhou told airport staff that he picked the seeds from trees in Ethiopia due to their bright colour.

It’s unknown whether the man knew anything about the toxicity of the seeds, or had any idea that most countries have strict regulation about importing plants. 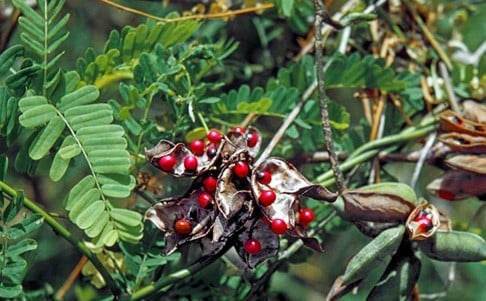 Jequirity beans, or Rosary peas (Abrus precatorius) are native to Hong Kong. Photo: SCMP PicturesThere have been reports on the mainland on people being poisoned, often fatally, by eating the beans or wearing bracelets or necklaces made from them.

The botanical name, Abrus precatorious, refers to the presence of abrin, a toxic compound that stops cells making proteins. It has a similar effect to ricin, one of the world’s most poisonous substances, derived from the seeds of the castor oil plant, Ricinus communis, which are also popular as beads or in instruments like maracas.

The castor oil plant is also native to Hong Kong.

Ricin is relatively easy to make, and has been linked to a number of attempted and successful assassinations. In 1978, the Bulgarian dissident Georgi Markov was stabbed in the leg from behind with an umbrella carrying a tiny pellet of the substance while crossing London’s Waterloo Bridge.

There is no antidote to ricin poisoning and Markov died four days later. The castor oil plant (Ricinis communis) also grows in the wild in Hong Kong. Its seeds produce its famous oil, during which process heat destroys the highly toxic protein ricin. However, handling its fresh or unprocessed dried seeds is hazardous. Photo: SCMP Pictures

We Know Who the Kidnappers Are !!!