American President Barack Obama and Cuba’s President Raul Castro disagreed over questions on human rights and Guantanamo Bay in a rare and, at times, tension-filled press conference in Havana.

The two presidents met at the Revolutionary Palace before facing the media. They talked about ways to move toward normal ties between their countries. The discussion included issues on which they disagree, including individual freedoms.

To a question about human rights in Cuba during the press conference, President Obama said, “I’ve met with people who have been subject toarbitrary detention and that’s something that I generally have to speak on because I hear from them directly and I know what it means for them.”

President Castro told reporters that he welcomed U.S. action to ease trade and travel restrictions. But he also said the 55-year trade embargo against Cuba must end. And the leader called on the U.S. to return Cuban territory used for the U.S. naval base at Guantanamo Bay. 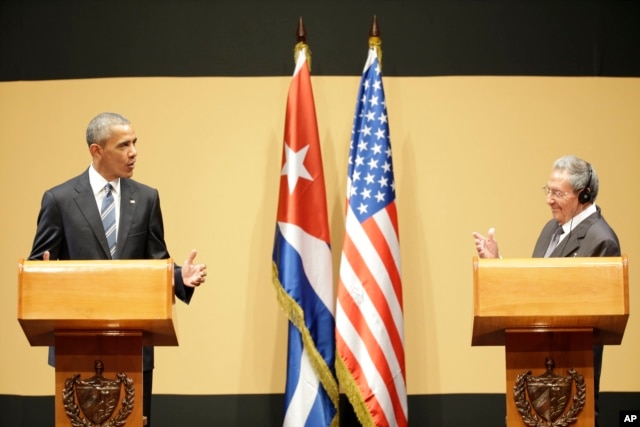 President Obama said the trade embargo did not serve the interests of either country. “The embargo’s going to end,” he said, although he admitted he could not be “entirely sure” when it would happen.

Only the U.S. Congress can end the trade embargo on Cuba. There is Republican opposition in Congress on Obama’s policy shift from isolation toengagement with Cuba.

Three reporters were permitted to ask questions although Castro said he would answer only one. All asked him about political prisoners in Cuba.

Castro also disputed the general idea of human rights problems in Cuba. He argued that no country in the world honors all 61 internationally recognized human rights. He said Cuba honors many, including the right to education, the right to health care, and the right to equal pay for equal work for everyone.

“Well, I cannot vote in the United States,” he answered. The crowd laughed. 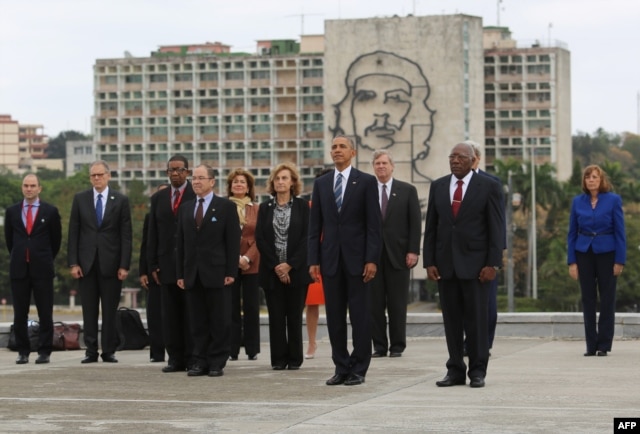 US President Barack Obama (C) attends a wreath-laying ceremony at Jose Marti monument in the Revolution Palace of Havana next to the Vice-President of the Cuban Council Salvador Valdes Mesa (C-R) on March 21, 2016.

Obama will attend a state dinner later Monday at the Revolutionary Palace.

He also is to attend meetings of both Cuban Americans and Cuban entrepreneurs. They are to discuss changes both governments can make to support more business ties between the countries.

Cuba and the U.S. officially renewed diplomatic ties in July. The U.S. has loosened travel and commercial restrictions since that time.

But Obama administration officials say the highlight of the trip will be the speech he will give to the Cuban people on Tuesday. He is expected to speak about the history between Cuba and the U.S., current plans to normalize relations and his vision for future relations.

VOA’s Mary Alica Salinas reported this story from Havana. Caty Weaver adapted the story for Learning English. Hai Do was the editor.