Netanyahu said that the Ethiopian Jews’ journey to Israel “articulates the vision of the ingathering of the exiles which is the essence of our existence, rebirth and prayers.”

Calling Ethiopian immirants “flesh of our flesh, equal among equals,” Prime Minister Benjamin Netanyahu said Sunday that there is no place for racism and discrimination in Israeli society.

“We will fight with all our strength against those unacceptable phenomena,” he said of racism and discrimination at an annual ceremony at Mt. Herzl commemorating Ethiopian Jews who died while trying to make their way to Israel. “We will uproot this from our lives. We will turn it into something inferior, despicable.” 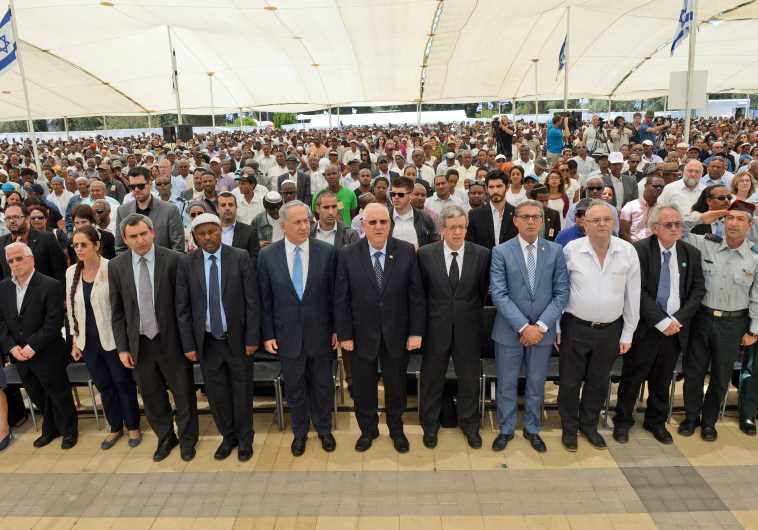 Netanyahu said that there are societies which have managed to rise above racism and discrimination, and that Israel must join them.

Netanyahu repeated a pledge he met two weeks ago after meeting Ethiopian-Israeli activists to head a special ministerial committee to deal with the community’s grievances, and said that the committee will bring a comprehensive plan addressing the problems to the government.

The prime minister described that meeting as an emotional one that rattled him. “I heard complaints about racism, prejudice, discrimination, and the use of excess force. I heard concerns about walking down the street because of the color of your skin. I cannot accept this, not in our country, not in the Jewish state.”

Netanyahu said that the Ethiopian Jews’ journey to Israel, and the trials they suffered on the way – many of them walking hundreds of miles through Sudan – “articulates the vision of the ingathering of the exiles which is the essence of our existence, rebirth and prayers.”

The ceremony commemorating the Ethiopian Jewish immigration is held on Jerusalem Day because of the community’s yearning for Jerusalem, a yearning Netanyahu said was the dream of every Jewish child in Ethiopia.

“I can tell you that I have taken quite a few walking journeys in my life,” Netanyahu said. “When I was a soldier I walked many kilometers – in the Negev, the Galilee, from sea to sea. But your journey is unparalleled. This was a journey of of weeks, months and sometimes years. It was a journey of complete uncertainty, a journey of tears.”

Netanyahu said that the immigrants “faced every possible evil: hunger and thirst, disease and death, imprisonment and torture, robbers. Sometimes you struggled with wild animals, other times with people who were worse than animals — and the stories are heartbreaking.”

Netanyahu said that although that journey is over, it is important that every Israeli child knows the tale, and that he has directed the educational system to instill that story into the schools, “because I think it’s part of bringing people closer together, and to implant a [feeling] of the common destiny of our people.”

President Reuven Rivlin, during his comments, said that of the 12,000 Ethiopian Jews who set out for Israel in the early 1980s, some 4,000 died on the way.

Rivlin said Israeli society made mistakes in the way it dealt with the absorption of the Ethiopian immigrants, and did not do enough to correct them. After laying a wreath at the monument to Ethiopian Jews, Rivlin said that just as Israel passes from Remembrance Day for the fallen to Israel Independence Day, there is also a symbolic transition from great sadness over the loss of loved ones to the joy of Jerusalem Day “which we celebrate together.”

The story of Ethiopian immigration is one of faith and hope and a display of tremendous courage and unflagging determination by the Ethiopian Jewish leadership, he said.

The President took Israel to task for having closed its gates to Ethiopian Jews for several decades before finally embarking on Operation Moses (1984) and Operation Solomon (1991) that airlifted much of the community to the country.

Relating to the recent protests, Rivlin — his voice almost breaking with emotion — said he was almost personally pained by the discrimination to which members of the Ethiopian community have been subjected over the years.

“We have all seen and heard the cry of pain of Israelis of Ethiopian background,” he said. “The demonstrators exposed an open wound that bled in the heart of Israel, a penetrating cry that comes from a feeling of bias, racism, humiliation and lack of resources.”

He said Sunday’s memorial gathering provided an opportunity to speak about hope for a better future, hope which is an antidote for apathy.