By William Davison in Wenchi

Despite the government ending plans to build on Oromo land around the capital, clashes continue, as lack of transparency and maladministration fuel dissent

wo years ago, on the edge of Chitu in Ethiopia’s unsettled Oromia region, local officials told Chamara Mamoye his farmland might be developed when the small town expanded. He hasn’t heard anything since.

“Losing the land would be a big problem for me, but if the government forces us, we can’t do anything,” the father-of-five says outside his compound.

Last month, Chamara, 45, saw the bodies of two protesters lying on the road after demonstrations rocked Chito. The dead were among up to 140 people killed by security forces during region-wide protests triggered by claims of injustice and marginalisation from the nation’s largest ethnic group, the Oromo.

Bolstered by US-based social media activists, the protest movement coalesced around opposition to a government plan to integrate the capital, Addis Ababa, with surrounding Oromo towns. After weeks of protests, the ruling coalition in the Oromia region said last week that it was cancelling the planned expansion.

Protests, however, go on, and the roots of popular unease and anger in Oromia run much deeper.

Dissatisfaction with corruption, maladministration and inadequate consultations on investments are fuelling dissent. This patchwork of grievances presents a fundamental challenge to an authoritarian government aiming to rapidly transform Ethiopia from an agrarian society to an industrial powerhouse. And the discontent is a national issue.

Urban expansion is causing clashes across the country as investors, officials and farmers protect their interests, says Seyoum Teshome, a lecturer at Ambo University.

“The villagers who have been asking for basic services and infrastructure rush to sell their farmland at market rate before it is expropriated at low rates of compensation,” he says.

As all land is state-owned in Ethiopia, houses are rapidly built on the edge of towns without official permission, to give plots value, Seyoum says. Investors may bribe corrupt officials to formalise illegal transfers, causing anger among dispossessed farmers, he adds.

Chamara was not among the mostly youthful protesters who took to the streets in Chitu, but he shares their concerns about an unresponsive ruling system. He’s frustrated by repeatedly broken official promises to tarmac the main road that runs through Chitu. Although the area has electricity and a mobile-phone signal, he is disappointed with the rate of progress since the government came to power 25 years ago. “There is no big development considering the time they had,” he says.

He is also upset by a lack of information and consultation over land policies, as well as concerned by suspicions of corruption – though officials do not flaunt ill-gotten gains. “The corruption is done in a secret way. It’s a silent killer,” he said.

In elections last May, Ethiopia’s ruling coalition and allied parties won all 547 seats in the federal parliament and 100% of legislative positions in nine regional councils. Despite the result, the government acknowledged widespread dissatisfaction with the quality of public administration and levels of corruption.

“In many areas, personnel said to be involved in massive corruption that led to sudden outbursts of anger are being dismissed,” government spokesman Getachew Reda said in an interview last week.

One of the deadliest incidents last month took place in Woliso town, about113km south-west of Addis Ababa. Six protesters were killed by security forces after thousands of people from surrounding villages took to the streets to protest over planned expansion of the town.

A group of young Oromo, who had gathered next to the Walga river a few miles from Woliso, spoke of community fears of evictions and poor compensation. But nobody seemed to know anything specific about government plans. “The government does not discuss in detail. They do not have consent,” one said. 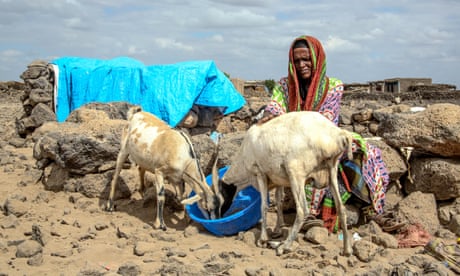 Ethiopia has long been a darling of the international donor community, which has appeared willing to ignore its poor record on human rights because high growth rates over the past decade have delivered some development goals. But the Oromo protests illustrate the vulnerabilities of this strategy.

To the north of Chitu, at Wenchi, which boasts a spectacular crater lake popular with tourists, grievances are almost tangible. Soldiers are still in town and, as elsewhere, the authorities have arrested people suspected of involvement in the protests. While some seem cowed by the crackdown, Rabuma Terefa is not.

His friend was shot in the leg on the edge of Chitu as he marched with other protesters from Wenchi.

When an elite military unit told elders the protesters must turn back, the group refused, arguing they had a constitutional right to peacefully demonstrate, said Rabuma. Within minutes, soldiers opened fire, killing people, including Birhanu Dinka, who was leading the crowd at that moment.

“They did not say anything, they just pointed the guns at us. We were begging them not to kill us,” Rabuma, 27, says. While abuses may have occurred, security forces are told to protect civilian lives, according to Getachew.

It is not only lives at stake: around the time of the protests in Wenchi, the property of a Dutch agricultural company, Solagrow, was torched by hundreds of people. Rabuma says the investment angered locals as it fenced off 100 hectares of prime communal grazing land, leased by the government. Solagrow says community relations were healthy and the valley was waterlogged until they drained it.

The project was collateral damage of the political dispute, according to manager Jan van de Haar. “[The protesters] became angry and they said there was only one way to continue, and that’s our farm, because we’re the only investment in that place,” he says. The attack destroyed $300,000-worth of machinery and potato seeds.

Rabuma had no sympathy for Solagrow, which he says was complicit in the government’s oppression of the Oromo. He is instead focused on the struggle ahead.

In Chitu, Chamara speaks for many Oromo as he implores the government to better manage investments and urban sprawl. “No one is opposing the development of the city, but it should not be at the expense of farmers’ lives,” he says.

A Call on the Obama Administration, Donor Countries to Condemn the Killing of Peaceful Protestors in Ethiopia.