Kwasi Appiah made a five-star start to his competitive tenure as Black Stars coach guiding the senior national team to a 5-0 win over Ethiopia in their 2019 AFCON Group F opener at the Baba Yara Stadium.

Black Stars skipper, Asamoah Gyan opened the floodgates in the 10th minute when he glanced home a header into the net off an Ethiopian defender.

The goal came from an assist by tricky left winger Agyepong who floated in a cross for Gyan’s 50th goal in the colours of the senior national team.

The Ethiopians were yet to recover from the early setback when striker Dwamena knocked down a ball for defender John Boye who controlled before firing high-up into the corner of the net in the 14th minute.

The pick of the goals was scored with the game inching close to halftime in the 41st minute when midfielder Ebenezer Ofori cut in on his left foot and rifled home a fierce long-range shot into the top corner of the net.

After a delayed restart to the second half, the Stars continued to dominate the Ethiopians and scored their fourth in the 48th minute through Dwamena prodded home from close-range after the Ethiopian keeper saved a Dede Ayew shot.

The FC Zurich striker who wasted some opportunities completed his brace in the 60th minute with a poachers effort after an Ethiopian goalkeeping howler from a cross by Agbenyenu. 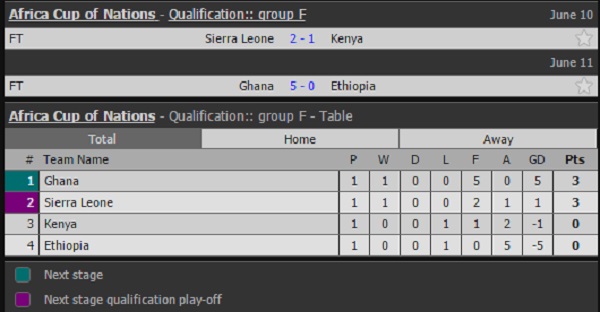 The massive 5-0 result moved the Black Stars to the top of the AFCON 2019 Group F qualifiers on goal difference.

The Stars and Sierra Leone both have three points each after the latter defeated Kenya 2-1 on Saturday in the other Group F clash.