Scientists have unearthed the jawbone of what they claim is one of the very first humans.

The 2.8 million-year-old specimen is 400,000 years older than researchers thought that our kind first emerged.

The discovery in Ethiopia suggests climate change spurred the transition from tree dweller to upright walker.

The head of the research team told BBC News that the find gives the first insight into “the most important transitions in human evolution”.

Prof Brian Villmoare of the University of Nevada in Las Vegas said the discovery makes a clear link between an iconic 3.2 million-year-old hominin (human-like primate) discovered in the same area in 1974, called “Lucy”.

Could Lucy’s kind – which belonged to the species Australopithecus afarensis – have evolved into the very first primitive humans?

“That’s what we are arguing,” said Prof Villmoare.

But the fossil record between the time period when Lucy and her kin were alive and the emergence of Homo erectus (with its relatively large brain and humanlike body proportions) two million years ago is sparse.

The 2.8 million-year-old lower jawbone was found in the Ledi-Geraru research area, Afar Regional State, by Ethiopian student Chalachew Seyoum. He told BBC News that he was “stunned” when he saw the fossil.

“The moment I found it, I realised that it was important, as this is the time period represented by few (human) fossils in Eastern Africa.”

The fossil is of the left side of the lower jaw, along with five teeth. The back molar teeth are smaller than those of other hominins living in the area and are one of the features that distinguish humans from more primitive ancestors, according to Professor William Kimbel, director of Arizona State University’s Institute of Human Origins.

“Previously, the oldest fossil attributed to the genus Homo was an upper jaw from Hadar, Ethiopia, dated to 2.35m years ago,” he told BBC News.

“So this new discovery pushes the human line back by 400,000 years or so, very close to its likely (pre-human) ancestor. Its mix of primitive and advanced features makes the Ledi jaw a good transitional form between (Lucy) and later humans.”

A computer reconstruction of a skull belonging to the species Homo habilis, which has been published in Nature journal, indicates that it may well have been the evolutionary descendant of the species announced today.

The researcher involved, Prof Fred Spoor of University College London told BBC News that, taken together, the new findings had lifted a veil on a key period in the evolution of our species.

“By discovering a new fossil and re-analysing an old one we have truly contributed to our knowledge of our own evolutionary period, stretching over a million years that had been shrouded in mystery,” he said.

The dating of the jawbone might help answer one of the key questions in human evolution. What caused some primitive ancestors to climb down from the trees and make their homes on the ground.

A separate study in Science hints that a change in climate might have been a factor. An analysis of the fossilised plant and animal life in the area suggests that what had once been lush forest had become dry grassland.

As the trees made way for vast plains, ancient human-like primates found a way of exploiting the new environmental niche, developing bigger brains and becoming less reliant on having big jaws and teeth by using tools.

Prof Chris Stringer of the Natural History Museum in London described the discovery as a “big story”.

He says the new species clearly does show the earliest step toward human characteristics, but suggests that half a jawbone is not enough to tell just how human it was and does not provide enough evidence to suggest that it was this line that led to us. 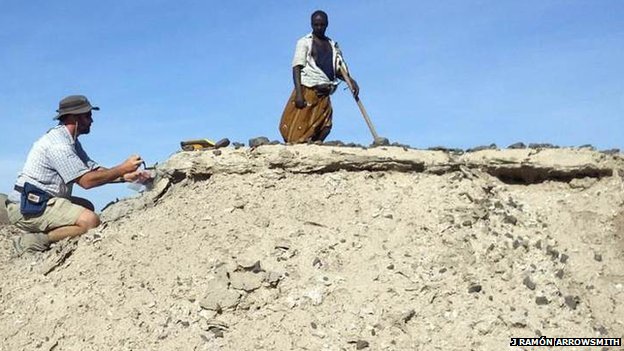 He notes that the emergence of human-like characteristics was not unique to Ethiopia.

“The human-like features shown by Australopithecus sediba in South Africa at around 1.95 million years ago are likely to have developed independently of the processes which produced (humans) in East Africa, showing that parallel origins are a distinct possibility,” Prof Stringer explained.

This would suggest several different species of humans co-existing in Africa around two million years ago with only one of them surviving and eventually evolving into our species, Homo sapiens. It is as if nature was experimenting with different versions of the same evolutionary configuration until one succeeded.

Prof Stringer added: “These new studies leave us with an even more complex picture of early humans than we thought, and they challenge us to consider the very definition of what it is to be human. Are we defined by our small teeth and jaws, our large brain, our long legs, tool-making, or some combination of these traits?”

TIBIBIR Conference will be held in Seattle from Friday, February 16- Monday,February 19.