The Kingdom of Aksum (also spelled as ‘Axum’) was an ancient civilization located in what is today northern Ethiopia and Eritrea. This kingdom existed roughly between the 1st and the 8th centuries AD. Due to its strategic geographical position between the Mediterranean Sea (connected via the Nile) and the Indian Ocean (connected via the Red Sea), the Kingdom of Aksum was an important player in the trade between the Roman Empire and ancient India. It was perhaps also due to trade that religions such as Judaism and Christianity were able to find a foothold in this ancient kingdom. This may be seen in the story of the ruling dynasty’s origins.

According to Ethiopian tradition, Aksum (the capital of the Kingdom of Aksum) was the home of the Queen of Sheba. Although this queen lived many centuries before the founding of the Kingdom of Aksum, its kings trace their ancestry to her and King Solomon of Israel. Hence the ruling house of this kingdom is known also as the Solomonic Dynasty. Ethiopian tradition also claims that it was through a merchant by the name of Tamrin that the Queen of Sheba heard about the wisdom of Solomon. Impressed by what she had heard, the queen decided to \ 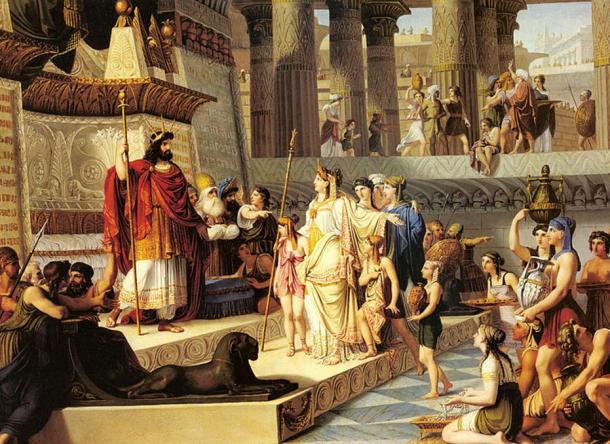 Solomon and The Queen of Sheba, by Giovanni Demin. (Public Domain)

According to an Ethiopian legend, whilst she was a guest in Jerusalem, Solomon made the Queen of Sheba promise that she would not take anything from his house. One night, Solomon went to bed on one side of his chamber, and the queen the other. Before he slept, Solomon placed a bowl of water near the Queen of Sheba’s bed. The queen woke up in the middle of the night, and drank the water, as she was feeling thirsty. The noise woke Solomon up, and seeing the queen drinking the water, accused her of breaking her oath. Yet, King Solomon was attracted by the queen’s beauty, and had intercourse with her. The Queen of Sheba became pregnant, and after she returned to her own country, she gave birth to a boy. The child was named Ibn al-Malik, known also as Menelik, who became the founder of the Solomonic Dynasty.

The Ark of Covenant and a Change to Christianity

The link between Israel and Aksum would be renewed about two decades later when Menelik had grown up. When the young man asked who his father was, he was told by his mother that he was none other than King Solomon of Israel. Thus, he visited Solomon in Jerusalem, and stayed there for three years. The similarities between Solomon and his son apparently caused confusion amongst the Israelites, who complained to the king. As a result, Menelik was sent home, along with the eldest son of the high priest, and 1000 people from each of the 12 tribes of Israel. Before leaving Jerusalem, Azariah, the son of the high priest, had a dream, in which he was told to take the Ark of the Covenant with him to his new home. Azariah took the Ark from the Temple, replaced it with a copy, and brought the sacred relic to Ethiopia. Therefore, some believe that the Ark of the Covenant is today located somewhere in Ethiopia. 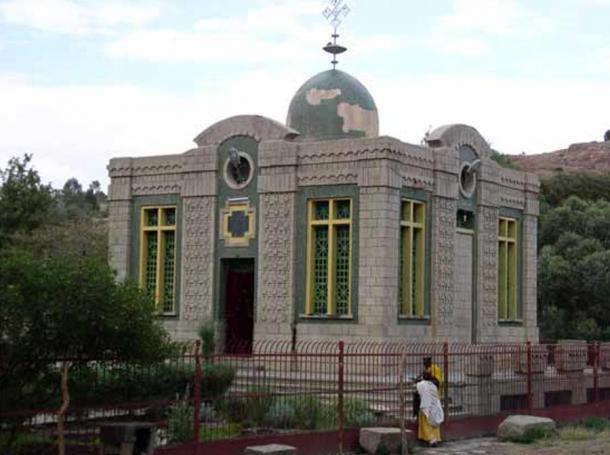 The Church of Our Lady Mary of Zion in Axum, Ethiopia. Some people argue that this church houses the original Ark of the Covenant. (CC BY SA 3.0)

Subsequent Ethiopian kings, including those from the Kingdom of Aksum, have claimed descent from Menelik. Additionally, a Judaic culture was adopted by the Ethiopians. A change, however, occurred during the 4th century AD, when Christianity arrived in Ethiopia.

The first Aksumite king who adopted Christianity was Ezana. The person who introduced Christianity to this region is said to have been a man by the name of Fremnatos, or Frumentius, as he is known in European sources. Fremnatos has been variously described as a merchant, a philosopher, and a theologian. According to tradition, Fremnatos was a Christian from Tyre, and was kidnapped in Aksum whilst travelling to India. Fremnatos became the tutor of the future king Ezana, and it has been speculated that it was he who converted the king. 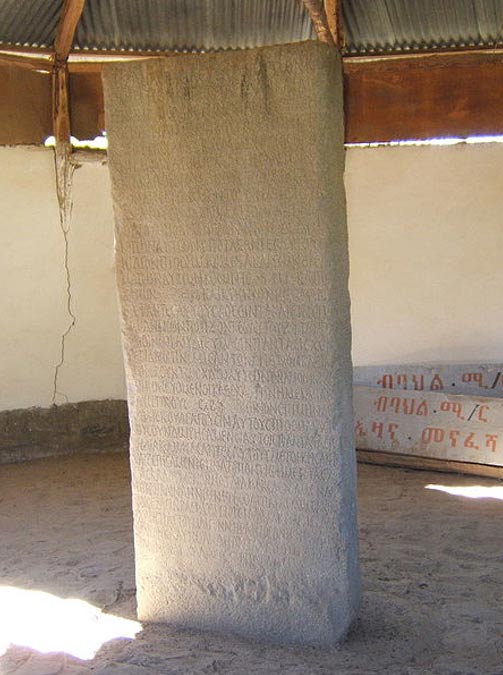 The Ezana Stone. (Rajesh Singh/ CC BY 2.0) This stone describes Ezana’s conversion to Christianity and his subjugation of various neighboring peoples.

Monoliths to Honor the Elite

It would take about 200 years, however, for Christianity to firmly take root in Ethiopia. Still, Christian churches were already being constructed during Ezana’s reign. It is the stelae / obelisks, however, which are the most iconic monuments of the Kingdom of Aksum. These monoliths are said to have been erected as funerary markers for members of the elite, and are exquisitely carved.  One of the most famous of these obelisks was one brought by Benito Mussolini during the 1930s to Rome as a war trophy. This monument was returned to Ethiopia in 2005, and re-erected in 2008. 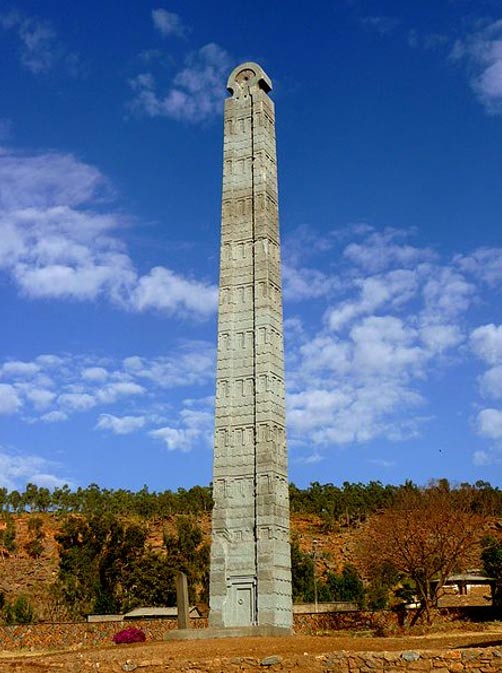 The Aksum Obelisk, returned to Aksum, Ethiopia. (CC BY SA 3.0)

During the heyday the Kingdom of Aksum, its rulers controlled territory not only in northern Ethiopia and Eritrea, but also in northern Sudan, southern Egypt, and even the Arabian Peninsula. This all came to an end, however, when trade stopped flowing into the kingdom. With the rise of Islam, new trade routes were established, whilst some old ones, such as the one passing through Aksum, fell into disuse.

Although the kingdom itself came to an end, its capital, Aksum, remained a significant city in Ethiopia. Apart from being Ethiopia’s most important center of Orthodox Tewahedo Christianity, it was also the place where the coronations of rulers from the Solomonic Dynasty were held. 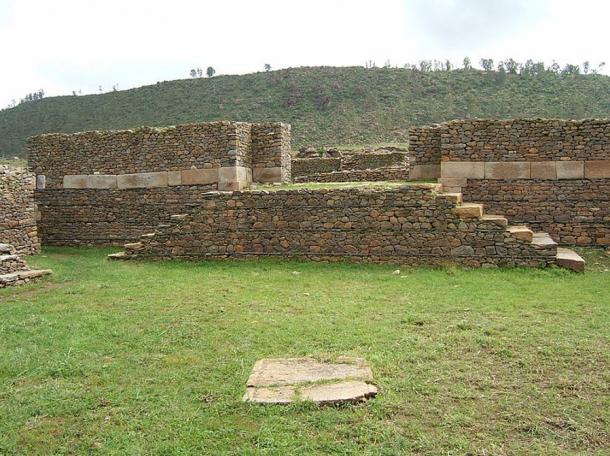 Ruins of Dungur Palace, Aksum, Ethiopia. (Giustino/CC BY 2.0) Dungur Palace was constructed during the Aksumite Empire – probably between the 4th-6th century AD.

Featured image: Bas-relief ‘Carrying the Ark of Covenant’ (Public Domain), The Aksum Obelisk (CC BY SA 3.0), and a depiction of the Queen of Sheba from the medieval manuscript ’Bellifortis’ by Conrad Kyeser (c. 1405), Prague school. (Public Domain)

The Metropolitan Museum of Art, 2016. Foundations of Aksumite Civilization and Its Christian Legacy (1st–7th century). [Online]
Available at: http://www.metmuseum.org/toah/hd/aksu_1/hd_aksu_1.htm

I’ll be seeing you in Ethiopia

An “Independent Commissione” for Ethiopia?: A Rejoinder to Tsadkan Gebretensae