Speaking to Xinhua, Bizuneh Tolcha, Director of Public Relations and Communications Directorate at the Ethiopian Ministry of Water, Irrigation and Energy (MoWIE), said the construction of the hydro project is going well and is expected to start partial test power generation soon.

The project is a major part of a massive energy infrastructure project the Ethiopian government is undertaking which aims to see the country’s power generation capacity increase from the current 4,280 MW to 17,300 MW by 2020, he said.

The Ethiopian government has embarked on massive energy projects across the country with a view to succeeding in its plans to make the East African country a light industry hub in Africa and a middle-income economy by 2025. 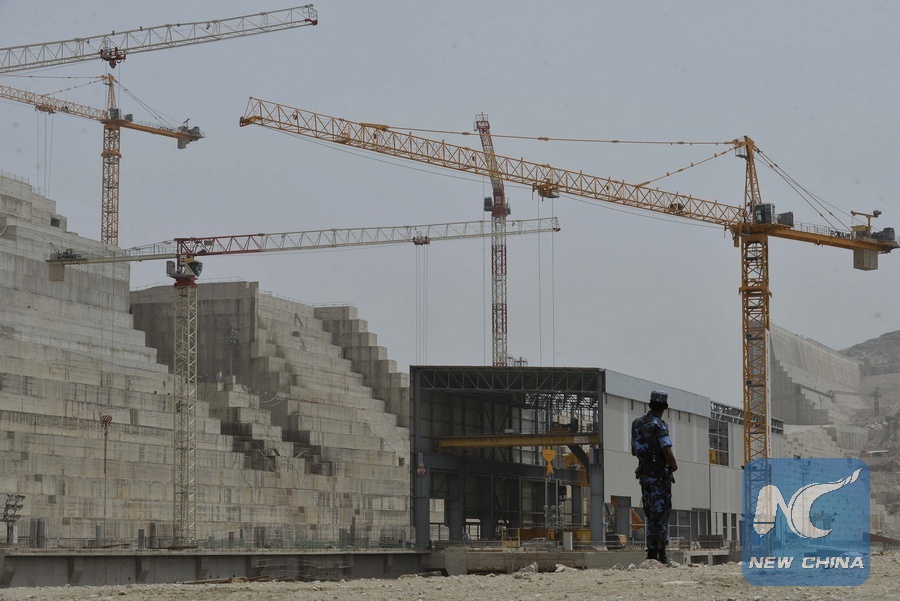 A security officer beefs up security at a mega dam site in Guba, Ethiopia, April 2, 2018. The 6,450 Mega Watts hydro dam named Grand Ethiopian Renaissance Dam (GERD) is the largest hydro project in Africa. GERD is currently at 65 percent completion and will require about five billion U.S. dollars to be complete. (Xinhua/Michael Tewelde)

GERD, whose construction started in April 2011, is being built at a cost of 4.7 billion U.S. dollars, fully financed from domestic resources and is expected to have a reservoir with a total of 74 billion cubic meters of water upon completion.

The hydro dam, which is being built on Blue Nile river 40 km from Sudanese border, has been billed as a landmark project signaling Ethiopia’s renaissance.

Already, a high voltage electric transmission line built by State Grid of China Electric Power Equipment and Technology Co. Ltd (SGCC) at a cost of 1 billion dollars has been inaugurated, waiting for GERD’s total commissioning to be operational.

State of Emergency in Ethiopia! A Constitutional Coup D’état?