The wife of a blogger and journalist detained in Ethiopia has called on the international community to pressure local authorities to release her husband, who is among tens of thousands held since a state of emergency was declared in the emerging east African power last year.

Anania Sorri, a 34-year-old writer and intellectual, was arrested in November on his way to a meeting at the US embassy in Addis Ababa. He is being held in a high security prison in the Ethiopian capital and has not yet been formally charged with any offence.

Bezawit Hailegiorgis, 29, his wife, said his sole crime had been “to express his thoughts honestly”.

“His crime is his determination to speak out. He is a brilliant political journalist. He was critical but always constructive … but being imprisoned is part of the job description of being a journalist here. It’s a zero-sum game, where someone has to lose, and at the moment they are not losing,” she told the Guardian.

Hailegiorgis said international pressure on the government would prove effective in her husband’s case. “I love my country … and I do understand that this is a sovereign country, but we all live in one system and the UK, the US and others do have leverage. Of course pressure would work,” she said.

Hundreds of people are thought to have been killed and tens of thousands detained in Ethiopia over the last year, though exact figures are unavailable. Opposition groups, mostly based abroad, say the figure is much higher. The government recently said it had released 11,000 detainees.

Scores of senior opposition politicians have been arrested and jailed, as well as bloggers and commentators such as Sorri.

The unrest has been most intense in areas dominated by the Oromo ethnic group, which comprises around 40% of the population. There have also been demonstrations and clashes in parts of Ethiopia dominated by the Amhara ethnicity, which analysts say indicate a deep-rooted discontent with decades of rule by the EPRDF.

The overall situation appears to have calmed since an upsurge in protest and associated violence in November, though some areas remain tense.

Ethiopia ranks 142nd out of 180 countries for press freedom, according to the Reporters Without Borders campaign group.

Diplomats in Addis Ababa described a “gulf between the outside perception of Ethiopia and what is happening inside the country”, branding the repressive atmosphere a “climate of fear”.

Although restrictions on the internet and social media have been eased, there has been little significant let up in the repressive security measures.

Hailegiorgis said she recognised she was taking a risk by talking to international media, as others have been detained for doing so.

She said her husband had been arrested without warning under special powers introduced with a state of emergency in October and was unsure of exactly what offence he was suspected of committing. He has not been allowed legal representation, has been denied books or newspapers, and is being held in a cell with around 40 others. Hailegiorgis is allowed to visit him when she wants, with their three-year-old daughter, and to provide her husband with food and medication. 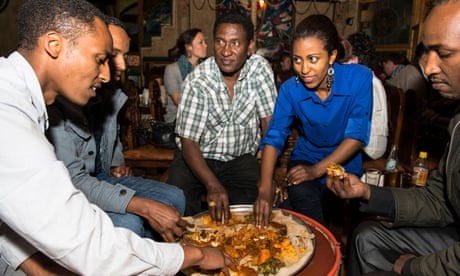 From chefs to musicians, talented ‘re-pats’ come back to build a modern Ethiopia

“Anywhere else he would win prizes and acclaim. He was not a criminal, not involved in politics, and not violent. Here, he goes to jail,” Hailegorgis said.

The EPRDF, which has been in power for 25 years, has been praised for bringing millions of Ethiopians out of poverty and ensuring growth rates that have averaged around 10% for more than a decade.

However, corruption and unequal distribution of the new wealth, coupled with a young and increasingly educated population, have meant growing discontent.

The unrest has been described by some analysts as “a political crisis” for a state that has increasingly followed an “authoritarian Chinese-style development model”. Ethiopia has built commercial and other ties with Beijing in recent years.

The prime minister, Hailemariam Desalegn, who took over following the death of the veteran leader Meles Zenawi in 2012, has promised political reforms and reshuffled his cabinet in November in an apparent effort to be more inclusive. He has also launched a huge programme of spending aimed at improving the lot of young people. The median age in Ethiopia is 18 and a vast expansion of further education has led to enormous demand for graduate jobs, which the country is struggling to meet. 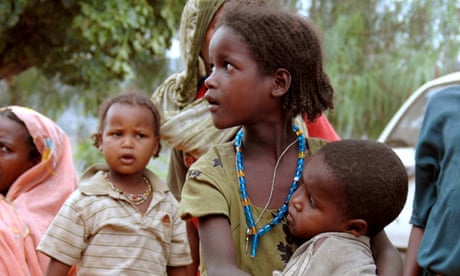 Many among the Oromo minority frame social and economic problems in ethnic terms. They say the government is dominated by Tigrayans, who comprise only 6% of Ethiopia’s 100 million inhabitants.

“The unrest and protests are rooted in decades of marginalisation and exploitation … if there is no democratic way of protesting, then there will be violence. That is inevitable,” said a 42-year-old Oromo activist in Addis Ababa who did not want to be named.

In an interview with the Guardian, Negeri Lencho, the communications minister, said journalists who had been jailed had either not “respected the ethics of the profession” or were not actually journalists at all.

“Ethiopia is facing challenges – political, economic, social – and journalists should understand the problems we face today and should provide the right sort of information our people need,” Lencho said.

“All members of the cabinet and the prime minister … all want to see a vibrant media … but a journalist has a purpose, if he is a real journalist, to reach out with the right information, not just his own opinion, be it hate or love.”

Hailegiorgis said pressure from the west could help obtain freedom for her husband.

“The international community is not doing anything at all. It’s a bizarre thing. It’s just lip service, just words. They say they are ‘highly concerned’ or ‘concerned’ but then … nothing,” said Hailegiorgis.