Earlier this month, Ethiopian Prime Minister Hailemariam Desalegn announced plans to release political prisoners in a surprise move the government says aims to “foster national reconciliation”. The prime minister also declared that the government would close the Maekelawi detention facility in Addis Ababa, which has been considered “one of the country’s most notorious police stations” since its construction in the 1970’s.

While the international community welcomed the government’s unexpected announcement as a step in the right direction, many in Ethiopia, especially civil society and political organisations, took the news with a grain of salt.

The obvious question many are asking is: What is in it for the government and why now?

Perhaps the answer partially lies in the fact that Ethiopia is host to a very important African powerhouse – the African Union (AU). The AU has long been trying to disentangle itself from Africa’s poor human rights record, including systematic suppression of basic rights and detention without trial of political prisoners.

Ethiopia is currently seen as an impediment to these ambitions. Over the years, the Ethiopian government has repeatedly failed to deliver basic services to its citizens and protect their fundamental human rights and freedoms.

In this context, it is understandable for the Ethiopian government to try and live up to its responsibilities as a founding member of the AU, by promising to release thousands of political prisoners.

But there is certainly more to this recent announcement than an honest desire to please the AU and improve the country’s human rights record.

An attempt to curb foreign interference

In the past few decades, the Ethiopian government has marginalised several ethnic groups by allowing a single ethnic group, Tigrayans, to dominate the political sphere. This has resulted in deep-seated, widespread dissatisfaction with the political establishment, and has caused occasional flare-ups of protest.

The government, rather than starting a dialogue with these marginalised communities, tried to suppress dissent by force. According to Amnesty International, the government of Ethiopia has engaged in a “crackdown on the political opposition which has resulted in mass arbitrary arrests, torture and other ill-treatment, unfair trials and violations of the rights to freedom of expression and association”.

This has led to a number of armed groups forming and waging war against the government of Ethiopia.

The most prominent among these groups is the Ogaden National Liberation Front (ONLF). Since 1984, the ONLF has been fighting for an independent homeland for ethnic Somalis in the region known as Ogaden, in eastern Ethiopia.

Another one of these groups is the Oromo Liberation Front (OLF), which was established in 1973 to promote self-determination for the Oromo people. The Oromo people are the largest ethnic group in Ethiopia, however, their economic and political participation remains minuscule.

Over the years, both organisations have managed to establish support beyond the borders of Ethiopia.

The Ethiopian government has repeatedly accused neighbouring Eritrea of supporting the ONLF, and Somalia of providing equipment as well as moral and organisational support to armed groups in the Ogaden region.

This foreign interference has damaged the national cohesion in Ethiopia and hindered the government’s efforts to improve the economic, social and political conditions in the country.

By promising to release political prisoners, many of whom have been imprisoned for their alleged support for these organisations, the government of Ethiopia is extending an olive branch to the country’s marginalised communities.

This gesture of goodwill may lead to an easing of tensions and give the government an opportunity to concentrate its resources on Ethiopia’s new economic and political interests in the region.

A possible truce with the ONLF and the OLF will serve to counter any attempts by the governments of Eritrea and Somalia to intervene in Ethiopia’s domestic politics. By positioning itself to start direct political negotiations with these groups, Addis Ababa will finally have a chance to derail efforts by its neighbours to create conflict within the borders of Ethiopia.

Another reason behind Ethiopia’s sudden decision to release political prisoners may be its determination to complete an ambitious construction project, the Grand Ethiopian Renaissance Dam, without hindrance.

The Grand Ethiopian Renaissance Dam, formerly known as the Millennium Dam, is a gravity dam on the Blue Nile River in Ethiopia that has been under construction since 2011. It is in the Benishangul-Gumuz Region of Ethiopia, about 15 km east of the border with Sudan.

The dam will be the largest hydroelectric power plant in Africa when completed, and the seventh largest in the world. It is expected to solve Ethiopia’s ongoing energy crisis and help the country expedite its development.

Ethiopia needs to ensure that the construction of the dam is completed without any disturbances. It is therefore in the interest of the country – and its main investor, China – to make truce with the ONLF and OLF at this time.

Also, the dam project may ignite another confrontation between Egypt and Ethiopia in the coming days. Egypt has long been at odds with Ethiopia over the $4.8bn megaproject, with Cairo fearing that the dam’s position may affect its access to water from the Nile River basin, which will feed the dam. Therefore, as Ethiopia prepares itself for the completion of this monumental project, it is forced to re-evaluate threats and priorities.

Addis Ababa’s sudden decision to release political prisoners is not only a necessary move aiming to fix the country’s human rights record, but also an important chapter in a complex political strategy. Ethiopia is prepared to make truce with its internal dissenters in a bid to end foreign interference in the country’s domestic affairs, and ensure the swift completion and smooth operation of the Grand Ethiopian Renaissance Dam.

The views expressed in this article are the author’s own and do not necessarily reflect Al Jazeera’s editorial policy. 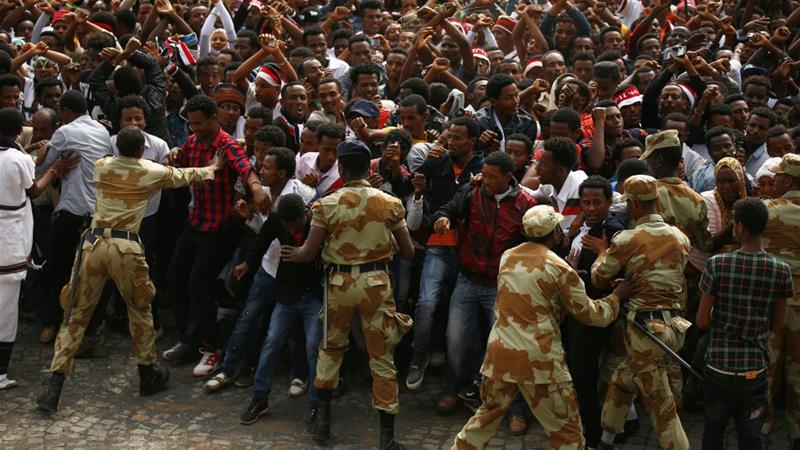 Thembisa Fakude is a researcher at the Al Jazeera Center for Studies.

“To deny people their human rights is to challenge their very humanity.”

A Call for Action: The OAU & Emperor Haile Selassie’s Rightful Place in History

Book Review: ‘Pharaoh: The Symbol of Dictators’ – By Ahmedin Jebel