Addis Abeba, March 05/2018 – Following the news of the state of emergency, which the speaker of the house of people’s representatives (Ethiopian parliament) said was approved by the majority in the house, albeit a “mathematical error” which led top the speaker to apologize, protests have flared up in various cities across Oromia against the news, leading to the death of at least seven people so far.

In addition to the death, more than 20 were also wounded, most of them by bullet, while some were severely beaten according to various information obtained by Addis Standard and other other media reports. However, not all causalities were related to protests as is the case for Kelbessa Mokonnen, 24, who was “shot from the back” in Gimbi, western Ethiopia, on Sunday “on his way to see a doctor for a headache he was experiencing,” according to Abdi, a relative who wants to be identified by his first name only. Kelbessa died on the spot,” Abdi told Addis Standard, adding “There was no protest in the city when Kelbessa was killed.”  He was raised by Likitu Haile, a single mom who is working as a waitress in a restaurant in the town, Abdi said. Four other people, including, Israel Deresu, Kelbessa’s friend who was accompanying him to the hospital we also wounded. “He is now admitted at Gimbi Adventist Hospital.” over the weekend, a graphic picture of showing Kelbessa’s disfigured face was making rounds in the Ethiopian social media space. Abdi confirmed the picture was indeed that of the victim.

And in Chiro, west Hararge zone of the Oromia regional state in eastern Ethiopia, one person, Ibrahim Abdella, was killed by security forces, according to Mustafa kadir, a relative who spoke to Addis Standard by phone. “He was killed from a close range on his way to work; there was no protest in the city and we were all going about our daily lives,” Mustafa said. Ibrahim’s body was taken to Chiro hospital before it was discharged to his family this afternoon. Addis Standard’s attempts to talk to the city police were to no avail.

Quoting doctors at hospitals in the Nekemte, Gimbi, Ambo and Dambi Dolo Bloomberg  news said “on Sunday they’ve handled 18 casualties with bullet wounds since the government suspended the constitution on Feb. 16. Ambo General Hospital documented two deaths on arrival and 13 casualties on Saturday, according to Garoma Shure, a doctor at the facility.” 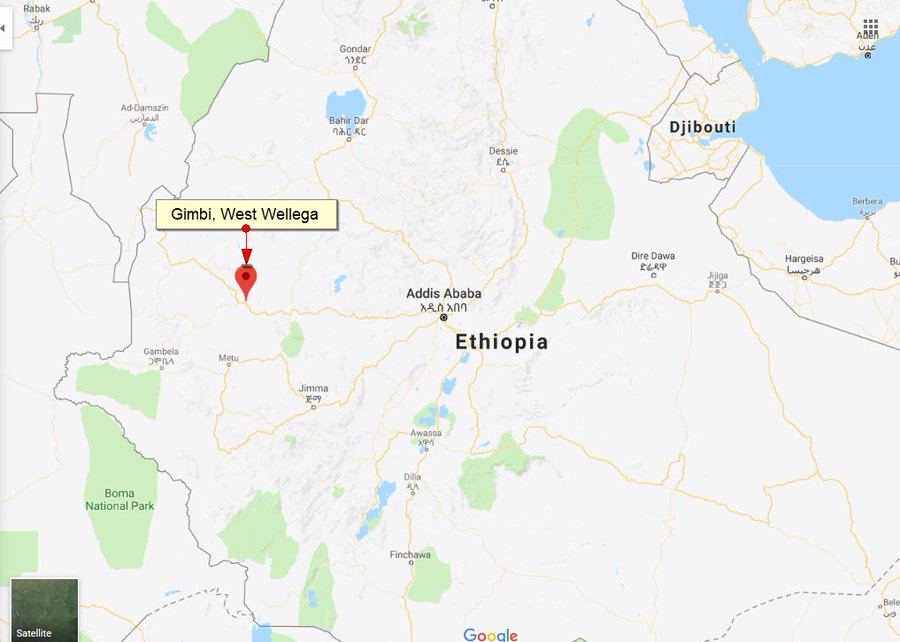 The incident in Gimbi was also confirmed by the VOAAmharic news.

And on Saturday, Taressa Digafe (pictured) and his father Digafe Dandana were both killed by security forces in Guder town, about 12 km west of Ambo, Arega Huliso, a relative, confirmed to Addis Standard.  “Both of the were together when they were killed not far from their house. The whole community is devastated,” a sobbing Arega said by phone.

On February 27, amidst continued anti-governments protests and reports of causalities, including death, in parts of the Oromia regional state, particularly in Dembi Dolo and Nekemt, in western Ethiopia, the Command post established to oversee the reinstated state of emergency said its patience against what it called ant-peace elements has run out and it no longer tolerates any form of disruptions of public peace; it said it instructed security forces “to take necessary measures to restore peace.”

Three days strike called by online activists to protest the state of emergency has also began in Oromia region today; scores of businesses, civil service offices and schools have been shut since early this morning. Transport services top and from the capital Addis Abeba are also affected. 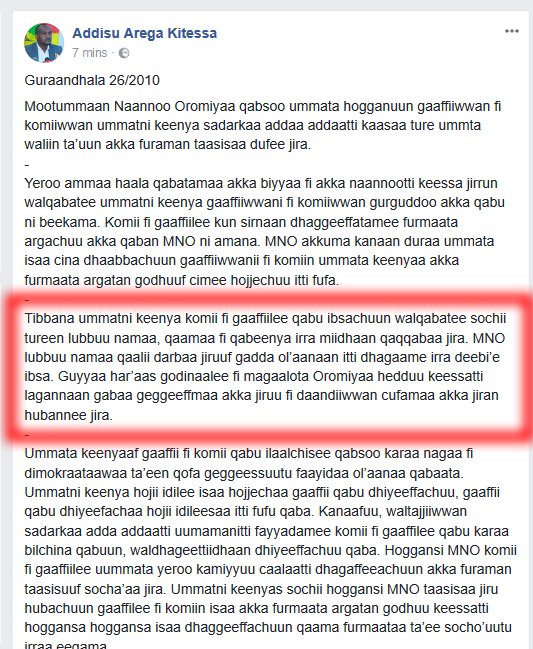 #Ethiopia– Addisu Arega, head of the communc’n bureau of #Oromia region, conformed that lives are lost, properties are damaged & ongoing road blockages & other forms of protests are happening in the region. He called on the public to ask their questions while continuing to work

Addisu Arega, head of the communication bureau of the Oromia regional state, conformed that lives are lost, properties are damaged & ongoing road blockages & other forms of protests are happening in the region. He called on the public to ask their questions while continuing to work.

And according to the state run television EBC, there were no activities in cities within Oromia regional state, including Ambo, Gimbi, Hirna, and Jimma. The boycotts strikes are happening despite the prohibition from command post enforcing State of emergency. This morning, the command post led by Siraj Fegessa urged “the society to carry out their normal day-to-day activities by ignoring information being circulated via social media to incite violence.”

According to implementation direction of the state of emergency text, which was released today, activities such as boycotting markets, missing from work places without reason, disrupting transport activities, unlicensed public gatherings, and protesting in educational facilities among others are prohibited. 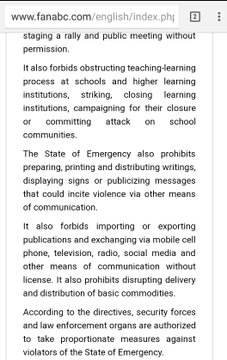 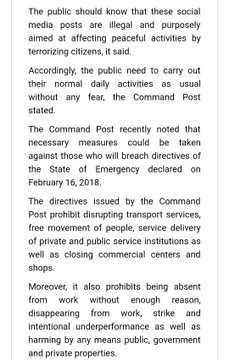 One of the cities affected by today’s boycott is Boshoftu, 45 km south of the capital Addis Abeba, where “there were no businesses, schools and government offices opened,” according to Alemayehu Huriso, a resident of the city. “We just woke up to an empty city; it looks like a ghost town.” AS

Ethiopian-born doctor returns to Sweden after being freed