The gunfire started Thursday night as demonstrators marched against the shooting deaths of two African-American men by police in Louisiana and Minnesota.
A total of 11 officers were shot, and some of the six officers injured are undergoing surgery, authorities said.
It was the deadliest single attack on law enforcement since the 2001 terror attacks, when 72 officers died, according to the National Law Enforcement Officers Memorial Fund.
Here’s what we know:
— A total of 10 police officers were shot by snipers during the protests, Dallas Police Chief David Brown said. An 11th officer was shot during an exchange of gunfire with a suspect, authorities said.
— Brown said it’s unclear how many suspects were involved, but three people are in custody.
— Dallas police negotiated and exchanged gunfire with a suspect for hours at a parking garage in downtown. That suspect is dead, a law enforcement official told CNN. The official did not say how the suspect died.
— “The suspect told our negotiators that the end is coming,” Brown said. The suspect at the garage also told negotiators more officers are going to get hurt, and that bombs are planted all over downtown Dallas.
— Police found no explosives during primary and secondary sweeps of the area, Dallas police Maj. Max Geron said Friday morning on Twitter. 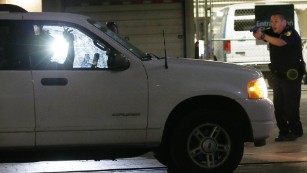 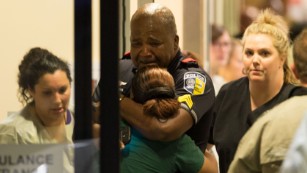 — Two of the shooters were snipers, who fired “ambush-style” from an “elevated position,” Brown said.
— Officers killed include one DART officer. DART, the Dallas Area Rapid Transit agency, operates buses and commuter rail in the city and surrounding suburbs.
— DART identified the officer killed as Brent Thompson, 43. He joined the transit agency in 2009, and was its first officer killed in the line of duty, DART tweeted.
— Thompson got married just two weeks ago to a fellow transit officer, DART Police Chief James Spiller told CNN’s “New Day” on Friday.
— Witness Ismael Dejesus said he filmed the shooter from his hotel balcony about 50 yards away. He described the gunman as carrying a weapon with a “pretty big magazine.”
— Retired FBI special agent Steve Moore said an attack of that magnitude required advance work.
— “This was an attack planned long before — waiting for an opportunity to go,” Moore said. “I think there was so much logistically, ammunition-wise. They may not have planned the location, they may not have planned the vantage point. But they had prepared for an attack before last night’s shooting is my guess.”
— President Barack Obama, who is in Warsaw, Poland, said his team is keeping him updated. “We still don’t know all the facts, we do know there’s been a vicious, calculated and despicable act on law enforcement,” Obama said. “I believe I speak for every American when I say we are horrified.”

Witnesses said the protesters were marching peacefully when the gunfire started. Crowds scattered.
“In the midst of it, gunshots just started barreling out,” witness Michael Jackson told CNN’s Don Lemon. “I immediately started running the opposite way.”
G.J. McCarthy said he thought it was fireworks at first. The bangs got louder, and protesters realized it was gunfire.
“That went on for a while,” he said. Crowds ran into a parking garage, and spilled out after word spread that there was a sniper nearby.
Clarissa Myles was eating at a McDonald’s nearby when peaceful protests suddenly turned chaotic.
“Everyone was screaming, people were running,” she said. “I saw at least probably 30 shots go off.”

What does the Ethiopian Red Cross Society have in common with Jawar Mohammed?