On September 11, 2001, 19 militants associated with the Islamic extremist group al-Qaeda hijacked four airliners and carried out suicide attacks against targets in the United States. Two of the planes were flown into the towers of the World Trade Center in New York City, a third plane hit the Pentagon just outside Washington, D.C., and the fourth plane crashed in a field in Pennsylvania. Often referred to as 9/11, the attacks resulted in extensive death and destruction, triggering major U.S. initiatives to combat terrorism and defining the presidency of George W. Bush. Over 3,000 people were killed during the attacks in New York City and Washington, D.C., including more than 400 police officers and firefighters.

Among the dead, there were two [native] Ethiopians Eskedar Melaku (female) and Yeneneh Betru (male). Here are some strories we found about them.

“What frustrated me,” said Nurya Bond about Eskedar Melaku, her closest friend, “was that she didn’t dislike the people I disliked.” It was no good trying to get a satisfying complaining session going, Ms. Bond 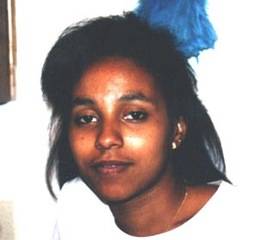 Ms. Melaku and Ms. Bond, who immigrated from Ethiopia to attend Queens College, met during their first year. Ms. Bond, who was alone, wanted to quit, but Ms. Melaku persuaded her to stay and invited her to meet her relatives.

Eskedar MelakuMs. Melaku did favors often and quietly. She signed Ms. Bond’s name as well as her own to a baby gift – which mystified Ms. Bond when she was thanked. She asked after the ailing mother whom an acquaintance had mentioned months before. Ms. Melaku, 30, was an assistant vice president at Marsh & McLennan, and three-quarters through her C.P.A. exam. Off duty, she tried some new things. “Would you like to suffer through the opera?” she asked Ms. Bond recently. Unsurprisingly, they found something else to do.

Before the terrorist attacks of September 11th, before his life tragically ended when his plane crashed into the Pentagon, Dr. Yeneneh Betru, born in Addis Ababa, Ethiopia, immigrated to the United States in 1982 with the dream of becoming a physician. His goal was a result of a promise he made to his grandmother to cure her of all that ailed an old woman. 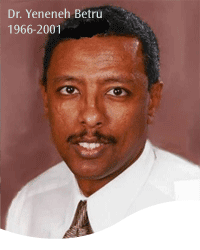 Yeneneh BetruHe attended high school at the Abbey School in Colorado, College at Loyola Marymount in Los Angeles, Medical School at the University of Michigan, and later completed his residency at Los Angeles County–USC Medical Center. During the last three years, he worked as the Director of Medical Affairs for IPC–The Hospitalist Company in Burbank, California. One of the pioneers in a new practice of medicine referred to as Hospitalist Care, he traveled around the country to train hundreds of physicians. Yeneneh was a young man full of drive and ambition and served as a great example to his whole family. He was a friend, a role model, and a mentor to his younger siblings, who often say, “all our accomplishments are a result of his guidance, I don’t know what we are going to do without him.”

In June 1998, when his grandmother became ill, Dr. Betru flew to Ethiopia to aide her doctors. Due to lack of equipment and supplies she, unfortunately, passed away during his watch. “With poor facilities and absent equipment, the sick have little chance of survival,” he often said. With a renewed sense of responsibility, Dr. Betru vowed to help enhance the condition of medical facilities in Ethiopia, beginning the process of creating a kidney dialysis clinic in Addis Ababa. In present day Ethiopia, given the lack of kidney dialysis machines, persons with kidney failure have virtually no chance of survival. Investing his own time and money, Dr. Betru acquired a half dozen dialysis machines, solutions and supplies. It was while Dr. Betru was working with the Ethiopian government to designate the proper location for the clinic that the terrorist acts of September 11, 2001 ended his dream on American Airlines Flight 77. It is a chilling irony that a man dedicated to enhancing human life was taken away by one of history’s worst acts of disregard for human life.

Dr. Betru was only 35 and just beginning his life after years of education and planning for the future. Who knew his future would be so short?

On this day: 39 years ago Emperor HaileSelassie passed away