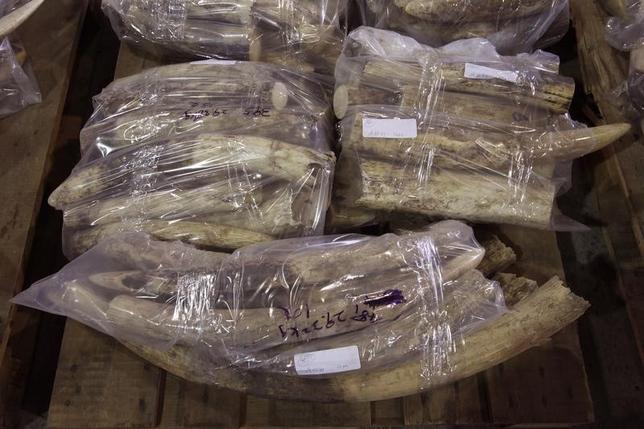 More than 500 pieces of ivory tusks are displayed after being seized by the Customs and Excise Department in Hong Kong November 16, 2012.
REUTERS/BOBBY YIP

A prominent Chinese businesswoman, dubbed the “Ivory Queen”, is innocent of Tanzanian charges that she financed a criminal network responsible for smuggling tusks from more than 350 elephants, her lawyer said on Monday.

“Ms Glan is innocent of all charges … We will fight the allegations against her in court,” her lawyer Nehemia Mkoko told Reuters.

Earlier on Monday a court in Tanzania’s commercial capital Dar es Salaam rejected Glan’s plea for bail, saying only the high court had the competence to grant it.

“The decision of the lower court means that we can now proceed to the high court and file our bail application,” said Mkoko.

“My client has not been allowed to enter any plea on the charges against her because the (lower) Kisutu court does not have jurisdiction to try this case. When the case is transferred to the high court for hearing, she will enter a plea of not guilty.”

Glan, a Swahili-speaker who has been in the east African nation since the 1970s, is secretary-general of the Tanzania China-Africa Business Council and owns a popular Chinese restaurant in Dar es Salaam, according to police sources.

In court documents seen by Reuters, prosecutors said Glan “intentionally did organize, manage and finance a criminal racket by collecting, transporting or exporting and selling government trophies” weighing a total of 1.889 tonnes.

The East African nation’s elephant population shrank from 110,000 in 2009 to little more than 43,000 in 2014, according to a census released in June, with conservation groups blaming “industrial-scale” poaching.

Demand for ivory from fast-growing Asian economies such as China and Vietnam, where it is turned into jewels and ornaments, has led to a spike in poaching across Africa.

Conservation of African big game has also been in the international spotlight in the last few months because of the killing of famed Zimbabwean lion Cecil by an American dentist.

China, the world’s biggest consumer of elephant tusks, announced in February a one-year ban on the import of African ivory carvings, but conservationists say corruption is fuelling poaching in Tanzania.

The Elephant Action League, a U.S.-based conservation group, said it believed Glan to be “the most notorious ivory trafficker brought to task so far”.

Demonstration Against the Ethiopian TPLF/EPRDF tranny regime in Brussel