Ethiopia is home to more than 100 million people—the second most-populous nation in Africa. It is also composed of wildly varying landscapes, and an incredible diversity of ethnic and religious groups. Getty Images photographer Carl Court reports that “Lonely Planet recently ranked Ethiopia among the top ten 2017 world tourist destinations,” and that it earned more than $870 million from tourism in the first quarter of 2017 alone. Gathered here are a handful of recent images from across Ethiopia, showing just some of its people and regions.

A priest stands on the edge of a cliff in front of the entrance to Ethiopian Orthodox rock-hewn church of Abuna Yemata Guh in the Gheralta Cluster in the Tigray mountains, on January 28, 2011, in Megab, Ethiopia. #

The colorful volcanic landscape of Dallol in Ethiopia’s Danakil Depression, on February 26, 2016. #

Portrait of an Afar tribesman with traditional hairstyle, in Assayta, Ethiopia, on March 1, 2016. #

Orthodox Christians sit outside the famous monolithic rock-cut churches during a Good Friday celebration in Lalibela, in the Amhara Region of Ethiopia, on May 3, 2013. #

A village sits below a prominent hill in the Simien mountain range, near Gondar, Ethiopia, on January 20, 2017. #

A woman from the Afar tribe with braided hair and a beaded headband in Chifra, Ethiopia, on January 21, 2017. #

The Omo River flows through low lying hills near the Bele Bridge in Ethiopia, on May 18, 2010. The bridge is one of three places along the Omo River’s 472 mile long length where a road reaches it. After rising in the Semien Hills of Northern Ethiopia the Omo ends its journey in Kenya’s Lake Turkana, the world’s largest desert lake. The Lower Omo Valley is home to many unique indigenous tribal peoples that practice flood retreat cultivation in addition to the raising of cattle and goats. #

Recently picked wild coffee is dried on a farm outside Bonga, Ethiopia, on December 4, 2012. The Kaffa region is known for its coffee production, wild coffee grown in high altitudes. This region is the original home of the coffee plant, coffee Arabica, which grows in the forest of the highlands. The red berries are the main source of income in the area. Local children and cattle also drink coffee. #

Bet Medhane Alem rock church is seen in Lalibela on April 23, 2011. According to legend, angels helped King Lalibela build this church and others like it in the 11th and 12th century after he received an order from God to create a new Jerusalem in Ethiopia. #

Portrait of an Ethiopian Orthodox priest holding a cross inside a rock church in Lalibela, in Ethiopia’s Amhara region, on February 23, 2016. # 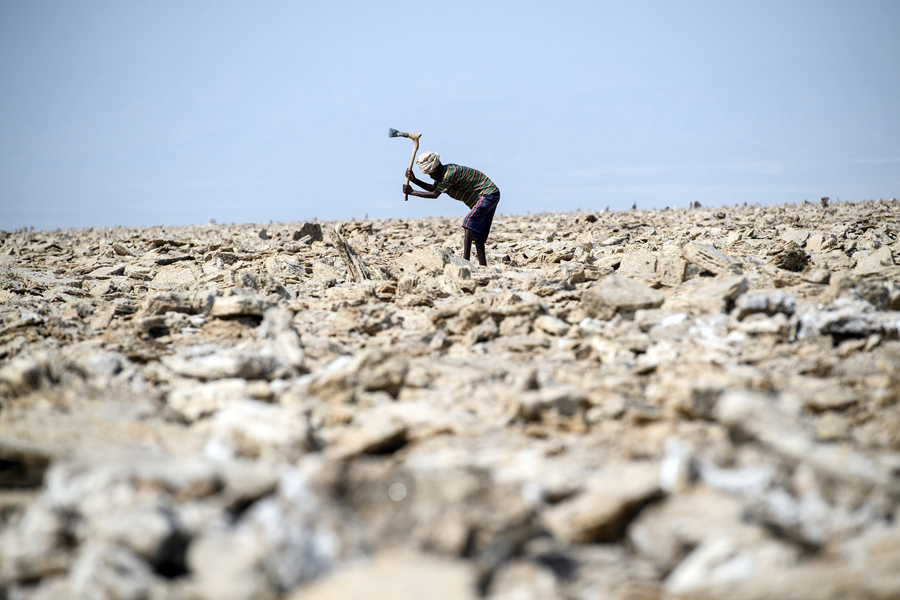 A camel caravan carrying salt mined by hand is led across a salt plain in the Danakil Depression on January 22, 2017 near Dallol, Ethiopia. The depression lies 100 meters below sea level and is one of the hottest and most inhospitable places on Earth. #

A smiling Ethiopian boy named Abushe with striking blue eyes, affected by Waardenburg syndrome (a genetic disorder that can affect pigmentation among other things), in Jinka, Ethiopia, on March 18, 2016. #

A smiling woman from the Borana tribe, during an Oromo Gada system ceremony in Yabelo, Ethiopia, on March 6, 2017. #

Portrait of an Afar woman with green eyes and tattoos on her face, on January 17, 2017, in Assaita, Ethiopia. # 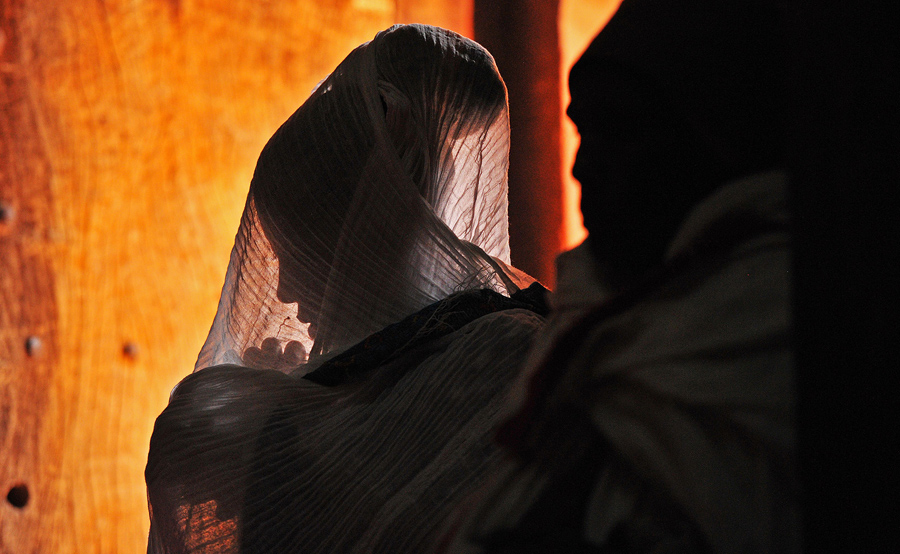 An Ethiopian Orthodox Christian pilgrim is pictured at a mass before the annual festival of Timkat in Lalibela, Ethiopia, on January 19, 2012. Timkat celebrates the Baptism of Jesus in the Jordan River. During Timkat, the Tabot, a model of the Ark of the Covenant is taken out of every Ethiopian church for 24 hours and paraded during a procession in towns across the country. #

A girl from the Suri tribe in Ethiopia’s southern Omo Valley region near Kibbish on September 25, 2016. The Suri are a pastoralist Nilotic ethnic group in Ethiopia. The construction of the Gibe III dam, the third largest hydroelectric plant in Africa, and large areas of very “thirsty” cotton and sugar plantations and factories along the Omo river are impacting heavily on the lives of tribes living in the Omo Valley who depend on the river for their survival and way of life. Human rights groups fear for the future of the tribes if they are forced to scatter, give up traditional ways through loss of land or ability to keep cattle as globalization and development increases. # 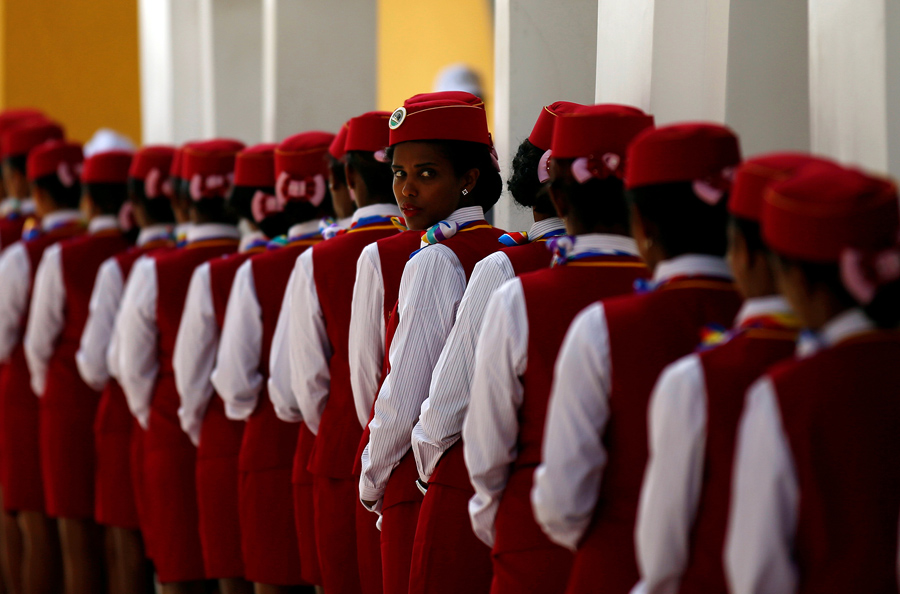 Stewardesses stand in line during the inauguration of a new train line linking Addis Ababa to the Red Sea state of Djibouti, in Addis Ababa, Ethiopia, on October 5, 2016. #

An aerial view of the El Sod volcanic crater lake where Borana tribesmen dive to collect salt, in Ethiopia’s Oromia Region, on March 4, 2017. #

Eric Lafforgue / Art In All Of Us / Corbis via Getty

Ethiopian Orthodox pilgrims jump into the Fasilides baths during the Timkat festival in Gondar on January 19, 2014. #

Salt canyons and pillars made of layers of halite and gypsum in the Danakil Depression, near Dallol, Ethiopia, on February 26, 2016. #

A girl from the Afar tribe with braided hair, photographed on January 15, 2017, in Afambo, Ethiopia. # 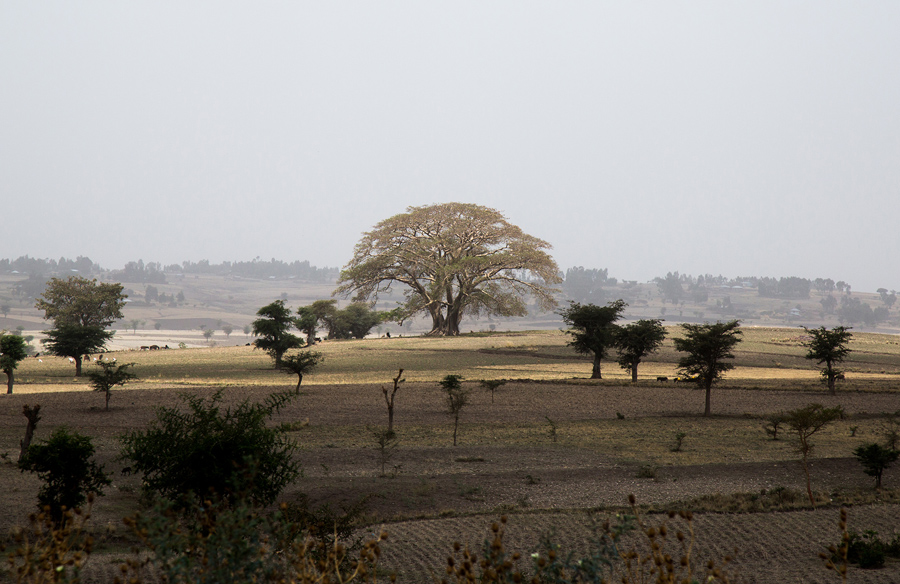 Sen. Franken to Meet with Coalition of Community Leaders to Discuss Human Rights Crisis in Ethiopia – Wednesday in St. Paul:

Ethiopia to play Botswana in an International friendly in Gaborone