A spokesman for Ethiopia’s prime minister told The Associated Press that the army chief, Gen. Seare Mekonnen, had been shot dead at his residence in the capital, Addis Ababa, by his bodyguard. He said a retired army general visiting the army chief at the time had also been killed in the same attack late on Saturday.

Amhara’s state president, Ambachew Mekonnen — who is an ally of the prime minister — and Mr. Ambachew’s adviser, Gize Abera, were also killed in the region, according to state media.

“He was shot by people who are close to him,” Prime Minister Abiy Ahmed said of Mr. Ambachew in a televised address on Saturday.

The president’s spokesman, Nigussu Tilahun, said the attacks in Addis Ababa and in Bahir Dar, the capital of Amhara, were linked.

Officials said the coup attempt had been orchestrated by the region’s head of security, Gen. Asamnew Tsige. General Asamnew was released from prison last year, having been granted amnesty for a similar coup attempt, according to media reports.

Regional government officials had been in a meeting to discuss how to rein in the open recruitment of ethnic militias by General Asamnew when the coup attempt began, officials said.

A week earlier, General Asamnew had openly advised the Amhara people, one of Ethiopia’s larger ethnic groups, to arm themselves, in a video spread on Facebook.

Residents in Amhara’s capital, Bahir Dar, said late Saturday that they could hear gunfire in some neighborhoods and that some roads had been closed off.

The United States Embassy said on Saturday that it was aware of reports of gunfire in Addis Ababa, and some residents said they had heard about six shots fired in a suburb near Bole International Airport around 9:30 p.m. local time on Saturday. 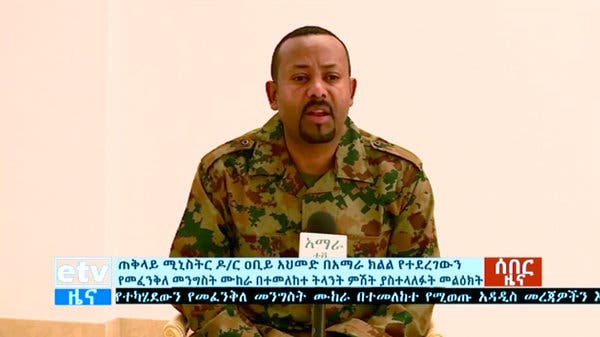 “Chief of Mission personnel are advised to shelter in place,” the embassy said on its website.

On Sunday, Brig. Gen. Tefera Mamo, the head of special forces in Amhara, told state television that “most of the people who attempted the coup have been arrested, although there are a few still at large.”

Mr. Abiy said in the statement on Sunday, “The situation in the Amhara region is currently under full control by the Federal Government in collaboration with the regional government.”

Since coming to power in April last year, Mr. Abiy — a former soldier, minister of science and technology, and vice president of the Oromia region — has tried to spearhead sweeping political reforms in the nation of 100 million in the Horn of Africa, where years of political violence had led to the resignation of his predecessor, Hailemariam Desalegn.

He has pulled Ethiopia back from the brink of a political implosion, since the country has been rocked in recent years by violent protests and had been in a state of emergency since the previous prime minister’s resignation in February.