A Turkish Cargo Airbus A330 has collided with an Ethiopian Airlines Airbus A350. The incident happened at Kinshasa-N’Djili Airport in the Democratic Republic of the Congo.

The Turkish Cargo A330-200F, registration TC-JOV was in Kinshasa following flight TK6512 from Istanbul. Meanwhile, the Ethiopian A350-900, registration ET-AWO arrived in the DR Congo capital after completing flight ET841 from Addis Ababa.

Aeronews shared a post by local citizen Magloire Kabwe, which showed images of the collision. The tweet explained that the wing of the Turkish airline aircraft hit the back of the Ethiopian Airlines plane. 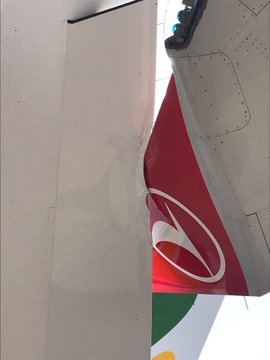 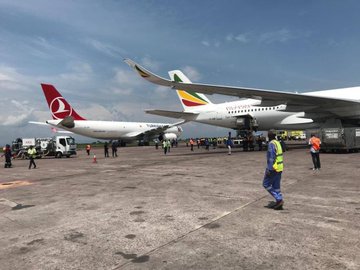 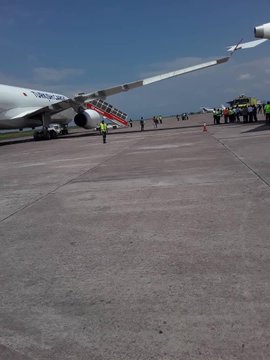 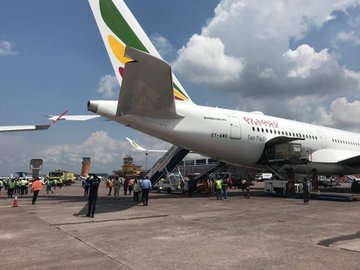 The close-up images show some minor damage to the outer body of the planes. Altogether, there doesn’t seem to be any major harm done from what we can see in the photos. However, we hope that any crew and passengers on board are safe.

Turkish Cargo is the shipping subsidiary of Turkish Airlines. This is not the first time that the parent company has been involved in an airport collision. In April, a Virgin Atlantic Boeing 787-9 collided with a Turkish Airlines Airbus A340 aircraft at Johannesburg Airport. This resulted in the grounding of both planes.

Additionally, The Independent reports that last year, an Asiana A330 began to taxi to take off and collided with the tail of a Turkish Airline A321. Thankfully, no passengers or crew were injured during this incident.

Today’s incident comes a day after the collision of a fuel truck at Dallas-Fort Worth Airport. This resulted in the damage of a couple of American Eagle Bombardier CRJ900s. Both of the planes were preparing for departure at the time before clashing.

More about the aircraft

Ethiopian is extremely proud of its A350. Earlier this month, the airline celebrated the first flight of the Airbus aircraft type to Toronto. According to Planespotters, it currently holds 13 units of the model within its fleet. The first of these arrived in June 2016 and the latest one came only last month. The carrier also has one more of the planes on order.

Meanwhile, Turkish Airlines holds 67 A330s within its fleet. However, only five of these are A330-200Fs. This is the Airbus range’s all-cargo edition, which is capable of carrying 140,000 lb.

Simple Flying reached out to both Ethiopian Airlines and Turkish Airlines for more information about the collision but did not hear back before publication. We will update the article with any further announcements.

Ethiopians Rally Olympic-Style, Chip in on Bonds for Dam